One of Japan’s best-selling models is finally coming to the UK... And Auto Express has driven it first. 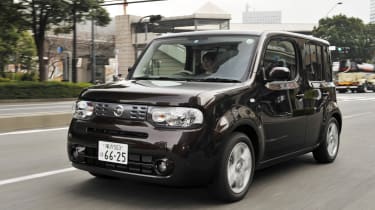 The Cube has never been sold officially in the UK, but it has still managed to build up a loyal following, with a significant number of enthusiasts personally importing the characterful MPV. With full backing from Nissan UK, the second-generation model looks set to be a sales success for the Japanese company. It’s just as distinctive as before, packs an amazing amount of space inside and is a much better car to drive than its predecessor.If Nissan prices the newcomer right, the cute Cube could become a popular sight on our roads.

At last, Nissan is boxing clever with the Cube! Firmly established as one of Japan’s best-selling cars, the quirky machine arrives in the UK in December 2009 – and Auto Express has driven it first.

The second generation is bigger and better than its predecessor in every measurable way, and will rival supermini-MPVs including the Vauxhall Meriva, Citroen C3 Picasso and Ford’s new B-MAX

With curious looks, rumoured to be inspired by a Fifties refrigerator, the latest model has round edges, flared wheelarches and a long bonnet. It's 160mm longer than before, 25mm wider and 10mm taller. Inside there’s much more space, with plenty of head and legroom for five tall adults.

Boot space is generous, too, and is made even better by the assymetric rear door, which creates a large opening. Aside from its practicality, the interior is an intriguing place to be. Designers claim they wanted it to feel as relaxing as a jacuzzi, and there are plenty of ‘fluid’ styling touches to be seen, including a ripple design for the roof that resembles the waves caused by a water droplet. Cubes with sunroofs get a special screen that lets in ambient light, too.

Quality has seen a significant improvement over the original model, with better trim and plastics used. However, our car’s combination of plush dark brown velour seats, beige dashboard and thick grey carpet may not be to everyone’s taste!

To keep costs down, the Cube uses a modified chassis from the Tiida – a Focus-sized saloon that’s sold in Japan and the US – and UK models will come with a choice of 1.5-litre petrol or diesel engines mated to either a CVT auto or five-speed manual.

We drove the petrol model, which produces 107bhp and 148Nm – the same as the old Cube. But thanks to a revised CVT gearbox – which will be floor-mounted on UK models, as opposed to the column shift on our test car – and a tweaked engine management system, the newcomer is quicker and more responsive.

The set-up also improves fuel efficiency, and the Cube returns 47mpg on the combined cycle. It won’t win any sprint races, though, as 0-60mph takes 10 seconds. UK buyers can expect even better response from manual-gearbox models.

While engineers were happy to leave the Cube’s engines pretty much alone, they focused heavily on the ride and handling. There’s a stiffer chassis and anti-roll bars, while the Cube has independent struts up front and a torsion beam layout at the rear, plus stiffer rear springs. The result is improved stability, less body roll and a more compliant ride.

A revised steering rack means turn-in is sharper, and there’s better feedback through the wheel.

The brakes are slightly larger, too. Nissan’s mission with the Cube was to upgrade every aspect of the previous model while maintaining the original’s appeal. The firm has done exactly that. When it lands in UK showrooms next year, Nissan will have a unique addition to its line-up.