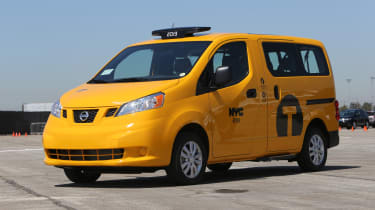 It’s crazy to think there are still thousands of Ford Crown Victorias, with their gas-guzzling V8s, in New York City. The Nissan NV200 cab might not have an iconic silhouette, but it’s far more fit for purpose, with a more efficient engine, acres of space in the back and USB ports to charge phones – all of which also bodes well for the forthcoming NV200 London black cab. Stubborn New Yorkers might take a while to get used to this new take on their beloved ‘Crown Vic’, but at least they can’t complain about the colour.

Nissan NV200 is the manufacturer's attempt to dominate the world’s taxi ranks. If you’ve ever visited Japan, the chances are you’ll have been driven by a white-gloved cabbie in a Nissan Cedric.

Now Nissan bosses are enviously eyeing the iconic yellow Ford Crown Victorias in New York and London’s traditional black cabs, and intend replacing them with their own versions.

We’ll be seeing the company’s first attempt at a new London taxi later this month, but we’ve already had the chance to try the version heading for New York City.

Both will be based on the Nissan NV200 van, with suitable and clever modifications for taxi use. In our New York cab, that means low-effort sliding doors on both sides, retractable side steps, USB charging ports, a driver/passenger intercom and anti-microbial vinyl seats. The best bit, though, is the panoramic glass roof – a real boon for sightseers looking to do a bit of skyscraper spotting.

There’s good room in the back, as well – acres more space than you’ll find in the old Crown Victorias. The Nissan’s much easier to get into, too, while the boot is huge – we suspect some of that will have to be sacrificed in wheelchair-friendly UK cabs that will also seat four rather than the New York cab’s three.

Safety in public transport is paramount, of course, and we especially liked the warning lights at the back of the car that glow orange to indicate to drivers behind that the sliding doors are open and someone may be about to step out.

Comfort’s important, not just for the passengers but for the driver, who gets a pretty car-like environment. Cabin quality is decent and the plastics robust – they’ll need to be because most New York cabs average around 70,000 miles a year. The high-up driving position is comfy, while air-con and even sat-nav are available. Controls for the sliding doors, intercom and retractable steps are hidden between the front seats.

Under the bonnet of the New York cab is a 2.0-litre four-cylinder petrol engine. It’ll propel the NV200 with a decent amount of zest, while the steering feels pretty meaty, too. Nissan has clearly addressed the van’s ride to make it feel more like a car – we didn’t experience any of the usual bounciness you get from an unladen van.

A big clear plastic panel behind the driver’s head gives a decent view out of the back, while low side windows and big door mirrors are handy, too.

Our UK cab will be modified to a greater extent than the New York version. Nissan has had to widen the front track to enable the car to meet London’s 25ft turning circle requirements, while London mayor Boris Johnson also asked for a front-end redesign to make it more “London taxi-like” We’ll see the results soon.

UK cabs will also get a 1.5-litre diesel, but the longer-term plan is to fit them with a version of the Nissan Leaf’s electric powertrain that can be fast-charged over lunch to provide enough power for a typical day’s work.