All-new Nissan Qashqai is eyeing crossover crown, so it has to beat Kia Sportage and Suzuki Sx4 S-Cross 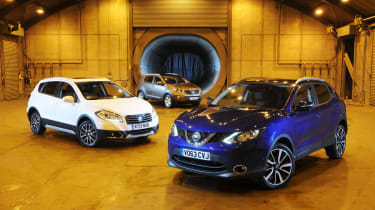 It’s been nearly seven years since the Nissan Qashqai burst on to the scene, setting the crossover template and turning the family car sector on its head. Since then the rugged five-door has been a consistent fixture in the UK sales chart top 10, even with a raft of high-riding new rivals keen to cash in on its success.

Nevertheless, Nissan isn’t willing to rest on its laurels, and now it’s launched an all-new model. Promising more space, improved refinement and lower running costs, the Qashqai MkII aims to address all the old car’s weaknesses. It’s also packed with hi-tech safety kit, has a sleek new look and promises to match premium brands with its interior’s upmarket appeal. Yet before Nissan can uncork the celebration champagne, the Qashqai needs to front up to some formidable competitors.

First up is the Suzuki SX4 S-Cross – our previous crossover road test winner and current class favourite. Good to drive, roomy and cost-effective to run, it provides a stern challenge for any new arrival.

The final member of our welcoming committee is the Kia Sportage, which sets the standard for style and quality. It’s also well equipped and backed up by excellent aftersales care. So which of our tough trio will emerge with victory?

All of our contenders make great family runarounds, with little separating them for cabin space. However, when it comes to boot size the cavernous Kia takes the honours, serving up a healthy 564 litres.

If it’s versatility you’re looking for, the Qashqai is the best bet. For instance, its neat false boot floor and load divider set-up promise 16 load-carrying combinations. Also, the Nissan’s cabin is full of useful storage.

Looking for a little fun behind the wheel? The agile, entertaining and eager Suzuki gets the nod. However, the capable Nissan isn’t far behind, and both feel more composed and agile than the slightly lead-footed Sportage.

All versions of the new Qashqai get a clever system that automatically dabs the brakes in order to reduce the effect of big bumps on the car’s body movement. Ultimately, this results in a smoother ride.

Lighting tech has come on a long way in the past few years – and each of our contenders takes a different approach to improving your night vision. The Nissan is available with the latest LEDs, which deliver a brilliant white light and use 50 per cent less power than xenons.

The latter are fitted as standard to the Kia – although the main beam units are traditional halogens. Suzuki’s High Intensity Discharge lamps have similar tech, but use the same bulb and reflector for main and dipped beams. 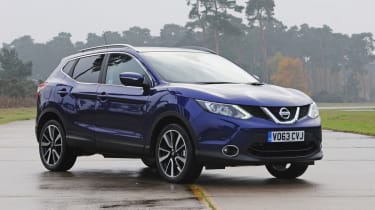 It’s a well deserved debut victory for the new Nissan. With its grown-up looks, strong refinement and low running costs, the original crossover has regained its place at the top. It may have lost some of its predecessor’s character, but a lengthy spec list, practical cabin and raft of safety kit more than make up for this. 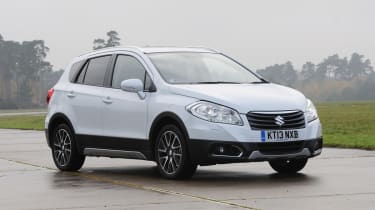 After a short reign at the top, the SX4 tastes road test defeat for the first time. Yet it’s still an attractive choice thanks to its engaging driving experience, generous tally of gadgets and low price. However, the S-Cross is not quite as spacious inside as its rivals, and it looks a little dull. 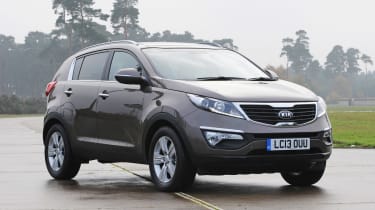 We love the way the Sportage looks, plus its interior effortlessly blends space and style. And while it’s pricey, it comes with plenty of equipment and Kia’s seven-year warranty. Unfortunately, there’s no escaping its lacklustre driving dynamics, high CO2 emissions and heavy thirst for fuel.