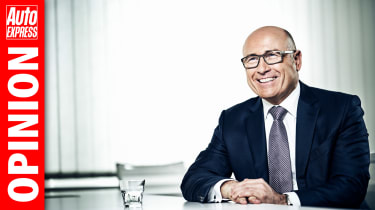 There was a gentle reminder this week that while the car industry is packed with incredible innovation, technology and engineering, it is, first and foremost, about people. Because it has been announced that Skoda boss Bernhard Maier is to leave the firm when his contract concludes in a couple of weeks’ time.

It’s perhaps unusual for Auto Express to single out an individual CEO like this, but Skoda remains one of the most popular brands with our readers, and Maier’s departure marks the end of a phenomenal chapter in the company’s 125-year history. He leaves after introducing models like the Kodiaq, Karoq, Kamiq and Scala, and with sales now nudging the 1.3 million mark, pretty much double what they were a decade ago.

At a personal level, Maier has always been acutely aware of the UK market’s importance to his brand – keen to engage with British media, often asking as many questions as those we put to him.

If anything, the rumours swirling around the German media last week suggest that Maier’s biggest problem may have been that he was simply doing too good a job. Members of the overarching VW Group Supervisory Board are said to have been mildly disgruntled at Skoda’s ability to not only build cars more cheaply in Eastern Europe, but also make them to basically the same standard of quality as more expensive Volkswagens.

Maier’s departure comes at the middle of a turbulent period among VW Group management, with a switch at the helm of the VW brand itself, and the CEO position at SEAT lying unfilled after Luca de Meo switched to Renault.

These jobs are key to the ongoing success of the brands and the VW Group. But more importantly for us, the people who fill these roles will influence which cars UK customers are offered by some of the biggest brands in the business. The achievements of the outgoing Skoda boss are proof of that.

For the latest Skoda news and reviews click here...

Mike Rutherford thinks cars from Gerry McGovern and Marek Reichman are favourites to win design award
"Despite the tragedy of 2020 so far, several intriguing developments emerged in the final week of June"