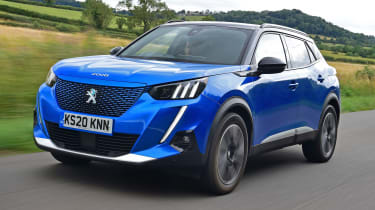 The Peugeot e-2008 is a sharp-looking small SUV that, although on the pricey side, will save you hundreds if not thousands of pounds every year on your motoring. Unlike with some EVs, there’s no compromise compared with an ICE model when it comes to practicality, while it’s even better to drive thanks to its smooth torque, refinement and relatively settled ride. There’s a good level of tech and plenty of kit, which makes the e-2008 a solid first electric SUV from Peugeot that should be on many first-time EV buyers’ shortlists.

Like every automotive brand at the moment, Peugeot is pushing forwards with its electrified models, but the French manufacturer offers one of the most convincing line-ups around if you do want something with an electric motor. Peugeot’s philosophy is “Choose your car, choose your powertrain” and that’s oh so apparent with this, the new e-2008 compact SUV.

There are still petrol and diesel models available, but the letter e at the start of this model’s name signifies all-electric power. That comes courtesy of a 50kWh battery and a 134bhp electric motor. If those figures look familiar it’s because the e-2008 sits on the brand’s e-CMP architecture, which also underpins other Groupe PSA cars like the DS 3 Crossback E-Tense, Vauxhall Corsa-e and Peugeot’s very own e-208 supermini.

It’s larger than those models, which makes it heavier, so the claimed range stands at 206 miles, but with 100kW charging capability, topping up that battery doesn’t take too long – 80 per cent in 30 minutes, or seven and half hours with a 7kW home wallbox, which most owners will use for overnight charging at home. Based on an electricity price of 14.4p per kWh, a charge should cost around £6.50, so with a conservative real-world range of around 160 miles you’re looking at less than 4p per mile in energy; a petrol SUV could cost three times that.

Herein lies the point of the e-2008 – but it’s not a one-trick pony, because the electric powertrain not only delivers low running costs (zero company car tax for business users in this tax year as well, don’t forget) but strong refinement. Plus, with an identical 434-litre boot to the petrol car, there’s no compromise in practicality.

With 300Nm of torque and just one gear, the car is pretty effortless to drive. It’s quiet when you put your foot down, surging forward with sustained shove until around 50mph, where it starts to tail off, but there’s still a good level of performance at motorway speeds. Yet at these speeds the range drops off quicker; putting the car into eco mode will help, but it softens the throttle response and reduces power. 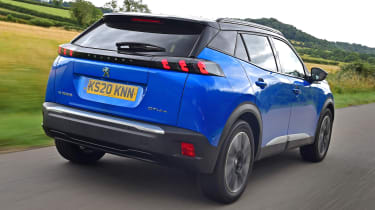 The ride is relatively comfortable, soothing bumps and ridges fairly well. You feel these inputs, but the damping is good enough to absorb enough of what the road throws at it. Nasty bumps still send the chassis skittering, but given this is a small family SUV and not a sporty car, the ride and handling are well judged. The light steering suits the car and follows your inputs precisely enough.

There aren’t many obvious styling details that highlight the e-2008 is electric, but compared with its petrol and diesel siblings, this car has a funkier front grille and plenty of ‘e’ badges to highlight its greener method of propulsion.

Inside, it’s pretty much business as usual, which is a good thing. Peugeot’s i-Cockpit features, comprising a digital dash behind the small steering wheel and a 10-inch central touchscreen on this GT Line model. The tech works well – mostly – with decent graphics and responses that are just quick enough, while it backs this up with lots of standard features. Sat-nav, Apple CarPlay and Android Auto, wireless phone charging, a colour reversing camera and three years’ connected services are included. So, too, are front and rear parking sensors, heated seats, climate control, LED headlights with high-beam assist and lots of safety tech – important for a family vehicle. This includes AEB with cyclist and pedestrian detection and lane-keep assist.

Quality is acceptable, but then with a price of  £32,915 after the £3,000 government plug-in car grant, you’d expect it to be a little better. This is the problem with small EVs at the moment, because while the e-2008 offers a usable level of range, it’s still expensive to buy. Even on monthly payments you’ll be looking at £463 per month on a three-year PCP contract limited to 8,000 miles per year, based on a £2,000 customer deposit.

However, factor in fuel savings over an ICE car (Peugeot is also offering six months free charging on the POLAR network and a home wallbox) and it starts to look sweeter given how easy the car will be to live with.