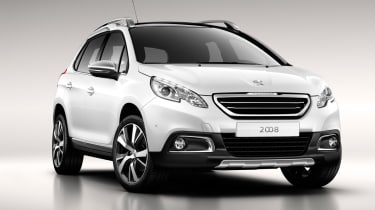 The production-ready Peugeot 2008 has been unveiled at the Geneva Motor Show. The all-new crossover is set to take on the Skoda Yeti and Nissan Juke when it goes on sale later this year.

The 208-based crossover has already been previewed by three separate concepts, but this is the first time we’ve seen the finished article.

It’s not drastically different to the 2008 Concept unveiled at the Paris Motor Show last September. New front and rear bumpers, smaller wheels, larger wing mirrors and the addition of door handles are the only cosmetic changes.

Design cues like the grille, scalpel-sharp headlights and scalloped bonnet are recognisable from the 208, but the 2008 has its own identity.

A stepped roofline and roof rails boost headroom and create a more rugged look, while 17-inch matt-finish wheels, bulging wheelarches and a raised ride height complete the mini-SUV styling. Black bumpers and sills help to protect the body from scrapes, while tall windows and a full-length panoramic roof should flood the interior with light.

The 208 pulled off the neat trick of being lighter and smaller than its predecessor, but with more room inside. So the 2008 should be pretty spacious, as it sits on a stretched 208 platform. It’s 200mm longer than the supermini it’s based on, at 4.16 metres, which will free up more legroom for rear passengers and allow it to better the 208’s 743 litres of luggage space.

This will also be the first Peugeot to feature a turbo version of the company’s 1.2-litre three-cylinder engine. It’s expected to produce around 110bhp, but return over 60mpg. If efficiency is a priority, though, a 92bhp 1.6 e-HDi diesel will emit 99g/km of CO2. Other engines are likely to include a naturally aspirated 82bhp version of the 1.2-litre three-cylinder petrol engine and a 156bhp turbocharged 1.6 THP.

There won’t be the option of four-wheel drive, but high-spec models will get Peugeot’s Grip Control system, as seen on the 3008 crossover. This adds an intelligent traction control set-up that can vary the torque sent to each front wheel. Coupled with standard ‘Mud&Snow’ tyres, it should give the 2008 moderate off-road ability.

Peugeot has global aspirations for the car, aiming it at Europe, Asia and Latin America. As a result, it will build the 2008 in three separate locations: Mulhouse in France, Wuhan in China and Porto Real in Brazil.

Prices are yet to be confirmed, but the 2008 is expected to carry a premium over the equivalent 208, and won’t be available with the entry-level 1.0-litre petrol engine, so a starting point of around £13,000 is likely when it arrives in UK showrooms in September.

Welcome to our Geneva Motor Show hub page, scroll down for all our Geneva content...
New Peugeot e-2008 2020 review 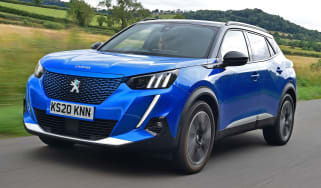