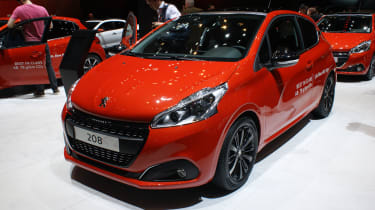 The 2015 Peugeot 208 has been unveiled in the metal at the Geneva Motor Show. It goes on sale in the UK in June with subtly revised styling, a more efficient engine range and additional safety systems, as well as new GT Line and 'GTi by PEUGEOT Sport' models.

The engine efficiency improvements now mean that the French firm makes the most efficient non-hybrid engine in European mass production, with the 1.6 BlueHDI achieving over 94mpg on the combined cycle. 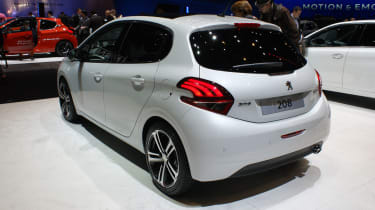 The facelift brings along exterior changes such as a sharper front bumper design with separate foglamps, a wider grille and deeper chrome finishings. New two-tone headlamps with a revised LED light signature are standard on all models from Active trim and above. At the rear, the LED tail-lamps get a revamp, while new 16 or 17-inch alloy wheel designs are available across the range.

Inside, there's a spread of new materials to take the Renault Clio rival more upmarket, with an extended soft-touch dashboard trim and a full-grain leather steering wheel. The seven-inch touchscreen remains on from Active trim and above, but now features Peugeot's Connect Apps smartphone integration and MirrorScreen which duplicates the phone's display.

The app integration brings new options for advanced navigation and infotainment features. Optional equipment also now includes a reversing camera and an Active City Braking function, too. Peugeot is proud to announce it will embrace more options for customisation, with exterior personalisation packs and a range of vibrant new colours.

Under the skin, engines are now all Euro 6 compliant, and every diesel is now below 95g/km of CO2. All diesels except base 75bhp trim get stop/start as standard, while that model and the 100bhp BlueHDI diesel offer a class-leading 94.1mpg and 79g/km of CO2. A 120bhp unit is also available with a six-speed manual gearbox and emissions of 94g/km. 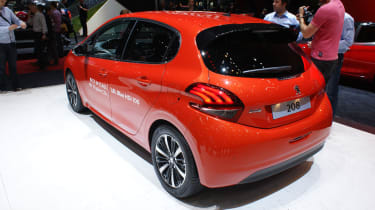 The petrol engine range is expanded to include a turbocharged three-cylinder 1.2 VTi unit with 110bhp. An optional six-speed automatic gearbox now gets Quickshift technology for faster shift times.

Two additional trim levels have also been included in the 208 range. A new GT-Line spec follows on from the cars 308 big brother, with a smart red-detailed grille, gloss black detailing and 17-inch 'Diamente' alloy wheels, with black and red stitched sports seats. Its available with the more powerful diesels or the new 110bhp petrol engine. 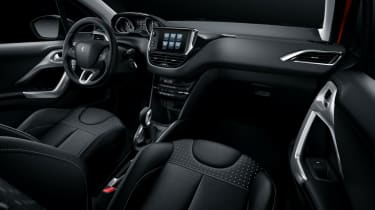 The other range tweak is that the 208 GTi 30th Anniversary special edition has now been made a permanent part of the range, dubbed 'GTi by PEUGEOT Sport'. The standard GTi is still available and now gets the same 205bhp 1.6 THP petrol engine, but the Sport carries over the lowered ride height, Torsen differential and wider track.

See all the latest news from the 2015 Geneva Motor Show here.

Welcome to our Geneva Motor Show hub page, scroll down for all our Geneva content...
Peugeot 208 review 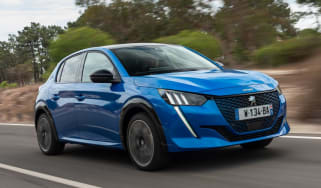 The Peugeot e-208 brings electric sophistication to the supermini segment