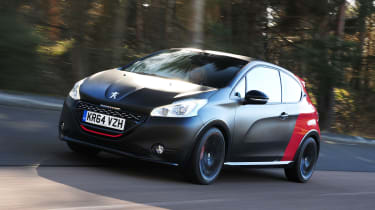 The introduction of this 30th Anniversary Edition makes you wonder why Peugeot didn’t seek advice from its motorsport division when it was developing the standard 208 GTi. Faster, more engaging and more direct, the 30th is a complete transformation and makes the £2,895 premium you’ll pay over the regular model look like a bargain. However, the Ford Fiesta ST does all of this at a fraction of the cost.

When the folks at Peugeot Sport get involved with the development of a new model, the result rarely fails to impress – look at the bonkers RCZ R. Now, the motorsport arm has worked its magic on the 208 GTi to produce this 30th Anniversary Edition, and we’ve driven it in the UK for the first time.

Beyond its debatable fashion sense, changes under the skin should give the GTi 30th just what it needs to take on the current cream of the crop, the Ford Fiesta ST. Power from the 1.6-litre four-cylinder turbo has been upped from 197bhp to 205bhp, with 300Nm of torque.

That’s enough to give it a real sense of urgency, and while this extra grunt sounds like it would give the front axle a thorough workout, the clever Torsen limited-slip differential from the RCZ R minimises torque steer and maximises traction. 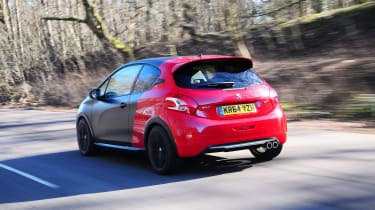 Dive into a corner and you can feel the nose tucking in, with the differential shuffling power across the axle to keep you cornering neatly. Even a heavy boot of throttle mid-corner doesn’t upset its composure, as you can feel the GTi pulling itself around the inside front wheel. Add in a wider front and rear track – 22mm and 16mm respectively – a 10mm reduction in ride height, stiffer dampers and stickier rubber, and you have a recipe to frighten the Fiesta ST.

A relaxed traction control and ESP system also gives you more freedom to exploit the Peugeot’s potential. What’s missing is a sharp and snappy gearchange. The six-speed manual transmission from the GTi remains, with a long and inconsistent throw. It’s no deal breaker, but next to the ST, the slightest of faults are highlighted. 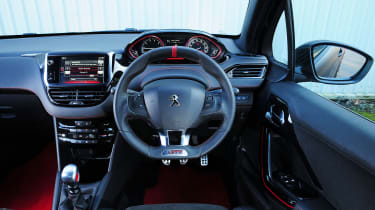 Every one of the 100 GTi 30ths bound for the UK come with Peugeot Sport bucket seats. They provide plenty of support when you’re attacking corners, but enough freedom and cushioning to keep you comfortable. And it’s just as well because the stiffer set-up and 18-inch alloys make a meal of rutted British tarmac, but no more than the ST.

It’s in the GTi 30th where Peugeot’s i-Cockpit cabin layout begins to make sense, with the small steering wheel adding to the car’s darty nature. Best of all, while the UK will be limited to only 100 examples of this model, its popularity has prompted Peugeot to introduce a new 208 GTi by Peugeot Sport trim, which adds the 30th Edition’s mechanical magic without the questionable exterior.