The Peugeot 308 SW works much better as an estate than a hatch - but is it as good as the SEAT Leon ST? 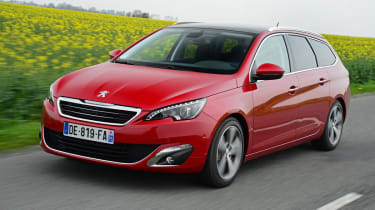 While the standard Peugeot 308 hatch can't quite match the Volkswagen Golf as a compact family hatch, the Peugeot 308 SW has every chance of becoming a class leader thanks to its enormous boot, range of efficient Euro Six engine and more space than its predecessor.

High-end Peugeot 308 SW models get LED headlights at the front and rear as standard, as well as big alloy wheels. Inside, all models get the same 9.7-inch touchscreen as the hatch that controls everything from the air-con, to sat-nav and the media system as well as a new range of connected apps.

The 308 SW is all about space, and Peugeot has certainly done its homework in this regard. It gets a wide loading area with a low-loading lip, which makes it easy to lift items in and out of the boot. It gets 610-litres of space as the 308 SW is 33cm longer than the hatch. What's more, when you fold the rear seats flat, you get a flat loading bay that increases boot space to 660-litres.

The Peugeot 308 SW gets four new engines over the hatch version -- two petrols and two diesels. The three-cylinder PureTec 1.2-litre petrol we're using on this test gets a direct injection turbo that makes 128bhp and 230Nm of torque. It's quite similar to the 1.0-litre Ford EcoBoost engine found in the Focus Estate.

The 308 SW's 1.2-litre engine is very strong and responds nicely and if you press the 'Sport' button on the centre console, it gives the car a sharper throttle response and weightier steering. In Sport mode, a read-out between the speedo and rev counter that works off the throttle sensor tells you how much you're using at any given time.

The six-speed manual gearbox fitted to the Peugeot 308 SW is a little bit vague and the handling is very similar to that on the hatch -- it's very comfortable on certain roads but a change to the wrong road surface can make for a choppy ride. It's also very dependent on wheel-size, so sticking to the 15-inch or 16-inch wheels is a safer choice than going for the bigger, prettier ones as the latter can thump around a lot over rough surfaces.

The Peugeot 308 SW works better than the hatch as it's mature, grown up and incredibly practical. What's more, the PureTech engine is a real highlight but it's still more of a cruiser than a GTi. The SEAT Leon ST pips it as a complete package, but at £19,000 for the flagship Active model, it's certainly worth a look if you're in the market for this type of car.