The Peugeot 5008 has already impressed us in petrol form, but with diesel power it's even better... 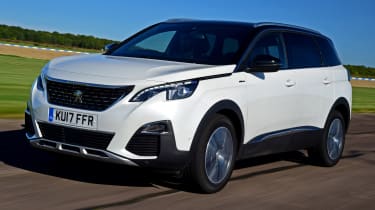 While the new Peugeot 5008 is a likeable car in petrol form, it’s this mid-spec diesel that makes the most sense in the range. It’s gutsy enough to handle a full load, offers impressive economy, and is reasonably refined. It complements a seven-seat SUV that’s greatly improved over its MPV predecessor, but doesn’t quite lead the class in the same way that the 3008, on which it’s based, does.

We’ve been generous with our praise for the Peugeot 3008 since its launch late last year, with the crossover named best mid-size SUV in this year’s Auto Express Awards. It also took the overall Car of the Year gong from our sister title, Carbuyer.  Hot on its heels, and keen to replicate its success, is the platform sharing 5008 SUV, which has now arrived in the UK.

We’ve already spent some time on British roads with a 1.2-litre petrol-powered version, but despite the bad press diesels have had in the past year, oil-burners are still expected to make up the sales volume. Here, we’re in the middling 148bhp 2.0-litre BlueHDI variant in sporty GT-Line spec to see if it’s the sweet spot in the range.

To say the seven-seat 5008 merely shares is architecture with the 3008 is a bit of an understatement. Viewed from the front they look identical, and from the back only the flat tailgate shape gives the 5008 away. Only the side view looks notably different, as a more squared-off roofline is necessary to afford rearmost passengers room for their heads. 165mm has also been added to the wheelbase, so the rear doors are longer. 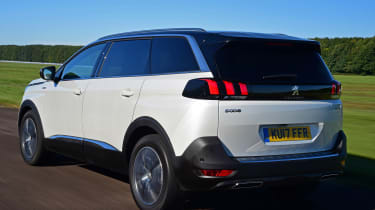 To our eyes, it’s not quite as well-resolved as its smaller sibling, but the 5008’s dash is just as visually interesting, with the same rich materials, smart centre console and the ‘Virtual cockpit’ with its small control wheel and digital dial arrangement. It’s one of the most feel-good cabins in its class, although the controls aren’t as intuitive to operate as the Skoda Kodiaq’s. Our GT-Line car comes very well-appointed, although the figure-hugging sports seats that are included feel a bit out of place in a car like this.

Space-wise, second-row passengers are pretty well catered for, with three individual sliding, folding and reclining seats and plenty of legroom even for tall adults. However, the seats are a bit hard and flat, while the optional panoramic glass roof eats into headroom. The third row seats are strictly for children, but at least they fold away with ease. Lift them out altogether, and you’re left with a massive 1,060-litre boot with the second row in place.

As the 178bhp unit with Peugeot’s new eight-speed automatic gearbox is yet to arrive in the UK, the manual-only 148bhp version was the most powerful 5008 available to try.  It instantly feels stronger than its figures suggest and more flexible than the 1.6-litre diesel, which can struggle a bit if you ask too much of it.

It picks up from around 1,500rpm and delivers as much performance as you’d reasonably need from a family SUV, although there’s little point in revving it out as it gets quite raucous. If you intend on filling your 5008 with kids and luggage often, we reckon it’s the pick of the range, while a claimed combined economy figure of 61.4mpg is very impressive for a seven-seat SUV. The stubby manual gear shift is nicer to use than previous Peugeot efforts, although we feel an auto suits this car better.

The 2.0-litre diesel’s relaxed power delivery also suits the 5008’s driving style, as its bulk means you won’t relish threading it down a narrow B-road. Body control is decent enough, though, and the steering is quick, if a bit too light when not in Sport mode. The 5008’s normally comfortable ride suffers with the 19-inch wheels of GT-Line, however, as it gets jostled around by really rutted tarmac.