The technology behind the new Peugeot 508 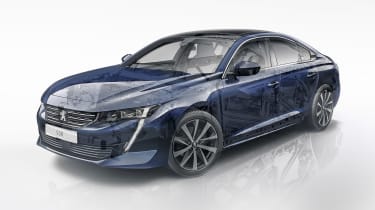 The devil, they say, is in the detail. And that’s certainly true of the hundreds of small touches that can make or break a new car in the eyes of buyers. This is why Peugeot has packed plenty of technology into the latest 508 – including some features that are new to the class.

The car is based on the PSA Group’s EMP2 platform, a common set of components that underpins the 508’s highly rated SUV stablemates, the 3008 and 5008. This, in itself, marks a significant step on from the previous 508, because that model sat on PSA’s older PF2 architecture.

EMP2 means a number of things: less weight (the bare chassis is around 70kg lighter than its predecessor), more sophistication in suspension geometry, much greater stiffness and rigidity to aid everything from cornering dynamics to refinement and access to PSA’s latest line-up of powertrains.

It also means Peugeot can give the 508 one set-up across the range, without the split between lower and higher-powered models that you get on some rivals. All 508s have MacPherson struts at the front and a multi-link layout at the rear, helping to deliver a solid blend of agility and comfort. And if you want, you can also have active dampers, for an even more sophisticated experience. 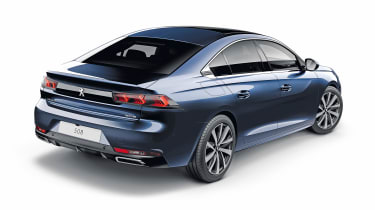 The engine line-up is drawn from the PSA Group’s latest range of powertrains. There are a couple of PureTech petrols, with 178bhp or a punchy 222bhp. When paired with the new eight-speed automatic gearbox, these engines have an ‘ECO’ mode where the car in effect freewheels when it detects that there are no feet on the pedals. Peugeot claims the tech, which operates between 15mph and 80mph, cuts fuel consumption by around three per cent.

For high-mileage customers and fleet buyers, the latest 1.5-litre BlueHDi will be an appealing choice, with CO2 emissions below the magic 100g/km mark. There’s also a 2.0 diesel unit with more shove.

Electrification isn’t far away, either. Peugeot is working on a plug-in hybrid version of the 508 that’s likely to reach dealerships in the second half of 2019. Again, this is only possible because of the switch on to the EMP2 chassis, which is designed to accommodate electric motors and batteries big enough to allow useful amounts of miles to be covered on electricity alone.

PSA has invested billions of euros in EMP2, in fact, and the 508 benefits from this in the amount of new technology that it can offer. The safety kit includes automatic emergency braking, of course, but also adaptive cruise control, active blind spot detection (with the further ability to correct the steering to avoid an accident), speed and road sign recognition, automatic headlight beam selection and a number of driver-attention monitoring systems. 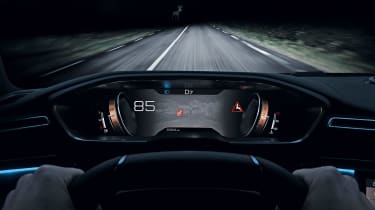 Inside, there’s further evidence of the attention to detail required to succeed in this class. Every 508 gets a touchscreen and on all but the entry-level versions, the display is capacitive, for a quicker response to inputs that’s more akin to the latest smartphones. And the screen itself is angled slightly towards the driver, making it easier to access.

Other neat touches include a smart electric tailgate, which can open with a wave of the foot below the rear bumper and a 27-inch-long panoramic glass roof that opens to allow more fresh air into the cabin. There is also a variety of parking aids, ranging from front and rear sensors up to fully automated assistance for both parallel and car park spaces.

The family car market is a notoriously tough one, but Peugeot is optimistic that these features put the all-new 508 on plenty of shortlists.

Eyes on the road

Windscreen camera is used for safety tech, including Active Lane Keeping Assistance and Road Edge Detection, speed sign recognition and Lane Positioning Assist, which can keep the car in the centre of the lane.

508’s Safety Plus Pack brings sensors that watch areas out of your field of vision. LEDs in the side mirrors light up to warn if something’s there.

EMP2 platform means there are MacPherson struts at the front and a multi-link configuration at the rear. Active dampers are available on the new 508, too.

All 508s get LED tail-lamps with ‘claw’ motif from the 3008 and 5008, plus distinctive ‘blade’ daytime running lights. Full-LED headlights are standard on higher-end versions.

Complex pressing delivers the 508’s profile. The rear three-quarter panel features a multitude of creases that would have been impossible to make until recently.

New chassis means a wider range of wheel sizes can be accommodated. Entry-level editions have 17-inch rims, but 18-inch and 19-inch items also feature in the line-up.

Every 508 has a colour screen (eight inches on Active, 10 inches on all other editions) and nav as standard.

Distinctive ‘piano key’ buttons are now an established Peugeot feature, thanks to 3008 and 5008. They allow user to jump between system functions on the touchscreen above.

The vast majority of 508s feature an eight-speed auto transmission. The unit is even more efficient than a manual on economy and CO2 emissions.

From GT trim upwards, 508s get an upgraded hi-fi with 12 channels of audio and 515 watts of power. The system was developed with FOCAL, a French hi-fi brand with 35 years’ experience.

Higher-end 508s come with Nappa leather upholstery, and the two front-seat occupants get a massage function as standard.

508 is the first car in its class to offer night vision. The optional system uses an infra-red camera that is better at spotting pedestrians or animals on the road ahead; it then alerts the driver to their presence via the i-Cockpit’s fully digital instrument panel. 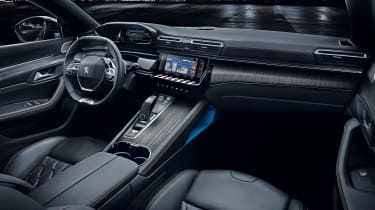 The 508 introduces a further evolution of Peugeot’s radical i-Cockpit layout, which is designed to allow easier focus on the road ahead. The most noticeable visible element is the smaller steering wheel, which you look over (instead of through) to see a 12.3-inch digital instrument panel.

The driver display can be configured to prioritise traditional dials, display navigation instructions, driver assistance information or, if the car is so equipped, night vision.

GT Line and GT versions of the 508 take the set-up one step further, with i-Cockpit Amplify. It aims to offer more dynamic or relaxing experiences by adjusting the lighting of the head-up digital instrument panel and touchscreen, the level of engine noise (using active speaker technology) and, if the option is fitted, the massage function on the driver’s seat, as well as the throttle response, steering weight and gearchange speed.