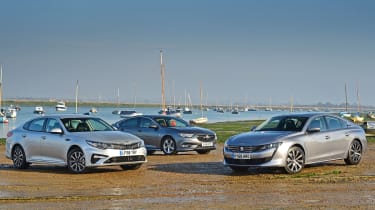 Many car manufacturers are pulling out of the large family car sector at speed, but one maker that’s bucking the trend is Peugeot. While the French marque has turned itself into an SUV brand of late with its 2008, 3008 and 5008 models, this new 508 Fastback is a return to the big family car market.

Peugeot is hoping that the hatchback’s sporty and sleek styling, upmarket interior and clever technology will bring it success in a class some rivals are abandoning.But even though the pool of family saloons and hatchbacks isn’t all that big, the newcomer still has some significant rivals to lock horns with.

The first here is the updated Kia Optima saloon, which boasts a smarter look and a new 1.6 diesel engine. That puts both these new models up against our class favourite, the Vauxhall Insignia Grand Sport. This car has value on its side, but also delivers massive practicality, good tech and an efficient but punchy turbodiesel powertrain. SUVs are here to stay, but it’s nice to know that there’s still an alternative for family motoring. The question is, which model of the three is the best bet if you don’t want to buy a crossover? 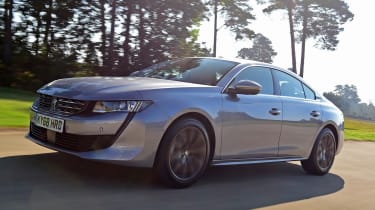 After injecting its renewed SUV line-up with vitality, Peugeot has turned its attention to its family model, with this new 508 Fastback. We’re testing it here in 1.5-litre BlueHDi 130 Allure trim, which starts from a relatively pricey £26,339.

Diesel has had a bad press recently, but continuous development from Peugeot means this relatively new 1.5 BlueHDi motor is an accomplished unit. With 129bhp and 300Nm of torque it’s punchy, despite the latter figure being 20Nm down on its rivals’.

This showed at the track, where the 508 was the slowest car from 0-60mph, taking 10.5 seconds, but it also wasn’t as flexible in gear. With 129bhp and 300Nm of torque it’s down on its rivals’, which means the Peugeot isn’t quite as punchy. 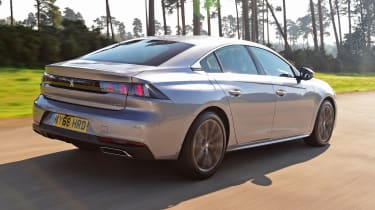 As with many Peugeots, the six-speed manual transmission isn’t the greatest. The Kia and Vauxhall’s boxes both feel sweeter when shifting; the 508’s change feels crunchy, especially if you try to shift too quickly, so it’s better to leave the engine in gear, which promotes a relaxed driving style.

Downsized diesel engines like this can sometimes be coarse on the move, but as long as you don’t extend the 1.5 unit too far beyond 3,000rpm, it’s smooth, delivers a sustained surge of performance and isn’t too grumbly. Push it hard and things get a bit noisier and you feel more vibrations, too.

The rest of the time it’s refined, and the motor’s diesel drone melts into the background. It’s matched by a chassis that smooths out the road relatively well, with a long wheelbase that gives a nice, lazy and languid feel to the way it deals with most bumps. But as with most cars on the EMP2 platform, harsher inputs clatter through the chassis. The small steering wheel makes it feel too keen to turn if anything, bu the chassis has just enough agility to keep up.

Testers’ Notes: “The i-Cockpit set-up works well in Peugeot’s SUVs, where you sit higher, but looking over the wheel to the digital dials isn’t as convincing in the lower 508. The driving position is more awkward than its rivals’.” 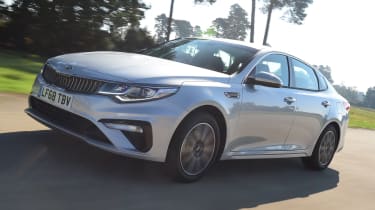 Kia has updated its Optima with a fresh look and a more efficient 1.6-litre turbodiesel, plus extra safety tech. These are all important points in this sector, so can this £24,260 Optima 1.6 CRDi ‘3’ (our pictures show a ‘2’ trim car) take victory?

Although the Kia boasts 5bhp and 20Nm more torque than the Peugeot, it’s also 175kg heavier, which is a substantial amount and enough to dull the Optima’s on-paper performance advantage. At our track the Kia sprinted from 0-60mph in 9.5 seconds, which was one second faster than the 508. It also pulled harder in gear, yet the new 1.6 CRDi unit is quieter and smoother than the 508’s 1.5. 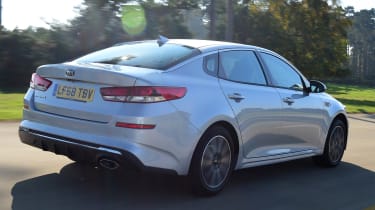 The gearbox is also more pleasant in the Optima, because the Kia’s shift action is slicker and more consistent, so with steering that feels precise enough for the size and weight of the car the Kia handles acceptably. The steering is also better judged compared with the very alert feeling you get from the small wheel in Peugeot.

It doesn’t have the soft, fluid damping of the 508 on the motorway because body control is a little tauter, but then over bumps and potholes the back axle in particular doesn’t rebound as aggressively. The Optima feels better balanced front to back than the 508; it’s just bland to drive.

Testers' Notes:  “There are automatic versions of all three cars, but while an auto transmission comes on all trims in the 508 and Insignia with 1.6 turbodiesel units, Kia’s DCT box is only offered on this top ‘3’ model.” 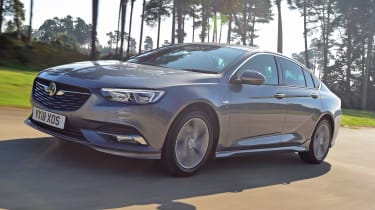 The Insignia Grand Sport is currently our favourite car in this class. It offers practicality and plenty of technology at an affordable price, and is surprisingly good to drive. We’re testing it here in £23,450 1.6 Turbo D 136 SRi Nav guise to see if it can fend of the challenge from the Peugeot.

The Insignia showed just how much at our test track, where it accelerated from 50 to 70mph in top in 8.8 seconds – 2.4 seconds quicker than both rivals. It was also the fastest from 0-60mph with a time of 9.3 seconds, while going from 30 to 70mph through the gears the Grand Sport was the swiftest, too. On that subject, the gearshift is acceptable, but nothing more than that, really. However, the chassis is surprisingly sweet. 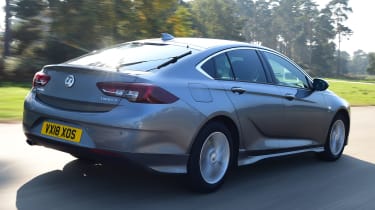 The car rides with supple composure, tracking over bumps and rifts in the road with a relatively gentle touch. You feel the Vauxhall being jostled by larger imperfections in the road, but the wheels only thump occasionally and the body is controlled well, so it’s actually composed.

This is true if you up the pace as well. There’s some roll, but this lets you feel the level of grip on offer, because there’s not much feedback through the steering. This roll means that the Insignia is still comfortable at higher speeds and there’s compliance to absorb the bumps, too. At a cruise refinement is good. The diesel might be noisy like the 508 when you push it, but at lower revs on a cruise it fades into the background as the ride and engine flexibility come to the fore. It’s an accomplished motorway car that also drives fairly sweetly.

Testers' Notes: “OnStar is no longer standard on any Insignia. It’s a £415 option, but at that price this luxury isn’t worth the outlay, because the service will be switched off at the end of 2020.” 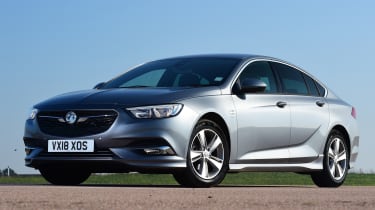 The Insignia wins yet again thanks to its incredible value for money. Performance, practicality, affordable running costs and a strong level of core kit are what counts in this class, and the Vauxhall nails it. It’s nearly as refined as the Kia, but faster, while it rides and handles as well as the Peugeot. It adds efficiency into the mix to make it a brilliant all-rounder. 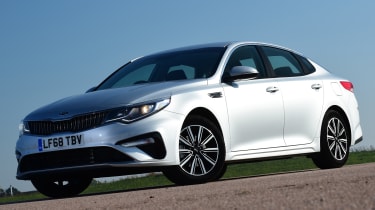 Some minor updates to the Optima have improved things. The new 1.6-litre diesel engine is refined and delivers acceptable performance, while the Kia still looks good, plus there’s plenty of space and, therefore, practicality to call on. However, the interior is bland and so is the driving experience. While it doesn’t offend, it’s also not as well-rounded as the cheaper Vauxhall. 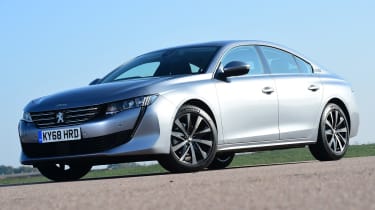 Make no mistake: the Peugeot 508 is a good car. It rides and handles well enough, the infotainment is strong and it’s efficient, so it will be relatively cheap to run. Trouble is, the 508 won’t be cheap to buy outright or on PCP, and it doesn’t offer any more practicality, performance or kit than its rivals. It’s economical and feels premium, but it’s simply too pricey in this company. 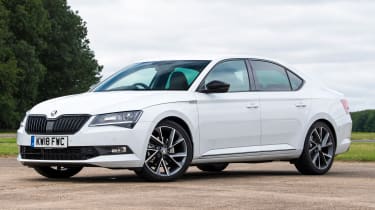 More power from its 2.0 TDI means there’s plenty of poke, while the Superb SE is relatively well equipped, too. It’s great to drive and the big hatch means plenty of practicality, revealing a 625-litre boot. It’s also well priced. 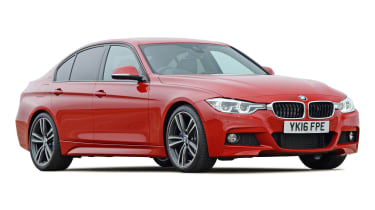 This budget buys you plenty on the used market, including a 2018 model BMW 320d in M Sport trim. It might not be as practical, but it gets lots of kit, feels more premium and drives brilliantly. It’s an automatic, too.