The facelifted Peugeot RCZ has been revealed, alongside an all-new 260bhp RCZ R version 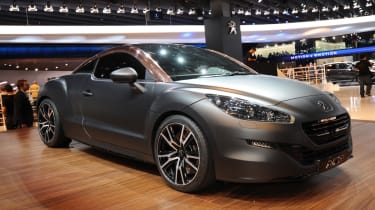 Peugeot has revealed a facelifted RCZ coupe, and taken the opportunity to introduce its most potent road car ever – the 260bhp RCZ R.

The RCZ R is officially a concept, but Peugeot has confirmed you’ll be able to buy something very similar by the end of next year.

Finished in a striking blend of matt black and copper, to match the Onyx supercar, the RCZ R uses a tuned version of the 1.6-litre turbocharged THP engine. It’s the same engine Citroen fitted to its DS4 Racing concept, seen at the Geneva Motor Show back in March.

Despite the incredible output of more than 160bhp per litre, Peugeot says CO2 emissions will be pegged at just 155g/km.

Lower, motorsport-derived suspension, grippy tyres, lightweight wheels and a Torsen limited-slip differential on the front axle will ensure it has the handling to match its power.

For those who like their cars a little less extreme, the standard model has received a round of updates, too. The most significant is the all-new front end, which replaces the old grille and nose taken from the 308 hatch.

It’s inspired by newer models such as the 208 and 508, while the central air intake has shrunk and is highlighted by two chrome bars that run along the top for a more restrained look.

Running underneath is another wider air intake which flows into a pair of LED daytime running lights. The six LED bulbs are arranged in a claw pattern in a nod towards Peugeot’s lion badge.

The interior is largely left alone, besides a new lacquer black gearshift surround and leather door inserts on top-spec GTs.

More personalisation options will be offered, though. There are three colours for the roof arches – Aluminium, Sand or Matt Black – while an optional Black Pack brings together the Matt Black arches with black bars in the grille, black brake callipers and black wing mirrors.

Stripes and RCZ decals can be added to the body, 10 alloy wheel designs – up to 19 inches – are now available and a Sports Pack, which adds a smaller steering wheel, a shorter gearlever and a sound amplifier for the exhaust, can be ordered on petrol models.

The engine range is identical, so includes the 1.6 THP petrol with either 200bhp or 156bhp, or the 2.0 HDi with 163bhp. The facelifted RCZ will go on sale in the first quarter of next year.