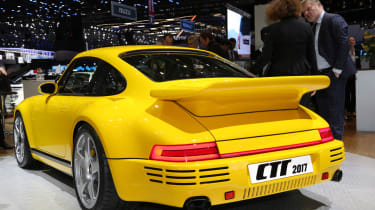 The Porsche 911 is a bona fide classic, but that doesn't stop the world's tuning firms from having a go at improving on the Porsche formula. One firm that has been particularly successful at refining the 911 is German firm Ruf, and it's celebrating 30 years of its legendary CTR 'Yellow Bird' at the Geneva Motor Show.

If you don't know, the Yellow Bird was the subject of a cult video, where the original model was thrashed around the Nurburgring Nordschliefe, with plenty of tail-out drifting around the 'Ring's notorious curves. For the 30th anniversary, Ruf has built a special model that looks like it's based on an original 911 shell, but the reality is far different.

The new 2017 CTR features full carbon construction to Ruf's own design, it just happens to bear the same shape as a 911, while carbon fibre body panels help to keep weight down to around 1,200kg. That's nearly 200kg less than the Lamborghini Huracan Performante, which has just set a new Nurburgring lap record, and with a 700bhp 3.6-litre twin-turbo flat-six hanging out the back, the new CTR is sure to be stunningly fast. Indeed Ruf quotes a 0-62mph time of 3.5 seconds, a sub-nine second 0-125mph time and a top speed of 225mph. 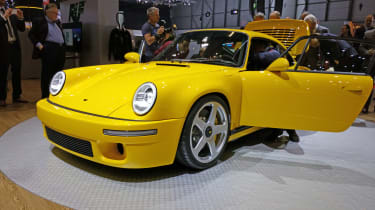 Unlike many modern supercars, the 2017 CTR has a traditional six-speed manual gearbox that sends power to the rear wheels via a limited-slip diff. The suspension is double wishbone in a pushrod configuration, while braking is handled by carbon ceramic discs with six-pot calipers up front.

From the outside, as well as the bright yellow paintwork, the 2017 CTR has other stying cues inspired by the Yellow Bird. It follows the shape of the narrower 911 Carrera, rather than the wide-body 911 Turbo, the rain gutters are deleted to improve airflow, extra air vents have been added across the bodywork and there are bespoke lightweight five-spoke wheels. The cabin has been kept as basic as possible, with only two carbon fibre-shelled seats, analogue dials and plenty of lightweight Alcantara trim. Ruf plans to build only 30 2017 CTRs to celebrate the Yellow Bird's 30 anniversary.

What do you think of the new Ruf CTR? Let us know in the comments...