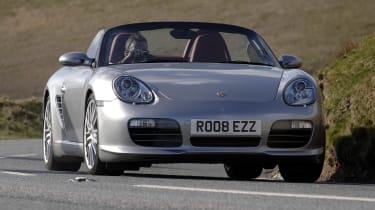 The RS60 Spyder pays homage to the Sixties – the era in which Porsche established itself as the brand we know today. But fans will be disappointed that the RS60 is not as hardcore as the original. However, its generous standard equipment, sports exhaust and subtle styling changes refine the Boxster experience. Despite the negligible power hike, the limited run of 1,960 examples will help to make this particular Porsche very desirable.

For most of us, the idea of owning a Porsche would be special enough. For those who want an extra slice of exclusivity, however, there’s the new Boxster RS60 Spyder.

It’s been named after the Porsche 718 RS60 Spyder, which won the famous Sebring 12 Hours sportscar race in Florida in 1960. What’s more, only 1,960 examples of the latest model are being offered worldwide.

Right from the outset, the Boxster was conceived to reflect the sporting simplicity of the classic Sixties Speedster models. It shares the same mid-engined layout and open-topped body, and one look at any Boxster’s lines is enough to see it has clearly been influenced by those cars.

The RS60 takes this a step further, with a roof and cabin finished in deep red – a colour scheme inspired by the seats fitted to the original racer. For those who find that arrangement a little too dramatic, there is the option of a more subtle grey interior and black hood instead.

Regardless of your colour choice, all cars get a black windscreen surround and a red finish to the tail-lights. A lower front spoiler and 19-inch alloys are standard, and to improve the handling, there’s a slightly wider track.

Inside, the door kickplates are engraved with the RS60 Spyder legend, while a commemorative plaque on the dashboard confirms each example’s place in the limited production run. To replicate the bare layout of a racing car, the cowling for Porsche’s signature three-dial instrument binnacle has been removed.

But it’s more than retro-inspired changes that set the RS60 Spyder apart. You also get a bespoke gearlever, suede surfaces on the wheel and door panels, and a silver finish to the seatbelts, headrests and seat backs. There are performance upgrades, too. As well as the widened track, chassis improvements include the Porsche Active Suspension Management (PASM) as standard.

It’s a £1,030 option on the regular Boxster S, and it stiffens the dampers via a button on the dashboard. The set-up is only really needed for track use, though – the factory setting proves to be more than sharp enough. In fact, just like the Boxster S, the RS60 Spyder is one of the best drivers’ cars that money can buy.

The crispness of the turn-in, the outstanding traction and the delicacy of the steering make it a joy on the road, while the perfectly weighted controls and spot-on driving position mean you instantly feel at home. There is plenty of compliance in the ride and, as a result, the RS60 is ideally suited to bumpy A-roads.

The well insulated fabric roof folds quickly and stows neatly, while the open-air experience is enhanced further by the modified sports exhaust system, which can be tuned to provide a pleasing sports car soundtrack.

A dashboard-mounted button opens baffles in the exhaust, which helps the system to produce a burble low in the rev range and a fantastic wail once the engine really comes on song above 5,000rpm.

The new tailpipes also assist in pushing the car’s output to 303bhp, but the modest increase over the standard car’s 295bhp doesn’t affect performance. The RS60 Spyder has the same top speed and 0-60mph time as its less powerful stablemate.

As a result, the £5,505 premium seems expensive. What’s more, adding the sports exhaust, PASM, red tail-lights and 19-inch alloys to the standard Boxster S only costs £3,643.