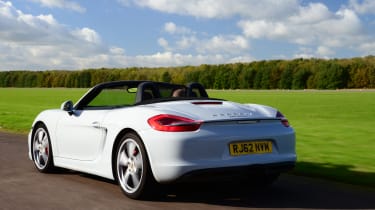 Lotus has lifted the lid on its wild Exige S. The new Roadster promises the same explosive performance and razor-sharp handling as its coupe cousin, but with added wind-in-the-hair thrills.

On paper, the mid-engined drop-top is impressive. Like the hard-top version, it’s powered by a muscular 345bhp supercharged Toyota V6 engine. Better still, the newcomer is 10kg lighter, so it should be just as fast. And since the Exige shares much of its underpinnings with Lotus’ Elise roadster, removing the roof shouldn’t result in wobbly handling.

The Exige Roadster’s £52,900 price tag is identical to the coupé’s as well, so you won’t pay a financial penalty for going roofless. Even so, at this price the Lotus still costs £6,113 more than one of the best high-performance roadsters money can buy: the Porsche Boxster S.

This finely honed two-seater isn’t as powerful as its British rival, but the beautifully balanced handling, bulletproof engineering and wailing flat-six engine make it a driver’s delight. And thanks to its classy cabin, decent refinement and surprisingly strong practicality, the Boxster will be as composed on the daily commute as it is blasting down a back road.

The big question is, which of our rapid roadsters will blow its rival away?

There's no point driving a roadster if you don’t get the wind in your hair as often as possible. The Boxster’s powered fabric roof can be raised or lowered in around 13 seconds. In the Lotus, you have to manually unhook a pair of spars and then remove the roof by hand. It’s relatively easy once you get the hang of it, but you have to store the folded roof in the boot and you’re more likely to get caught out by an unexpected shower.

Porsche charges £182 for a wind deflector to sit between the roll hoops. When it’s fitted, the cabin is surprisingly calm at speed. The Lotus retains the coupé’s glass rear screen, yet its interior is still more blustery.

Ready for the track?

These roadsters appeal to keen drivers, and there’s a host of upgrades aimed at delivering more thrills. The Lotus’ £2,000 Race Pack adds circuit-optimised suspension, four-mode traction control, launch control and an exhaust bypass valve button. For £800 you can have Pirelli Trofeo tyres, while £1,700 buys high-performance brake discs. With the Boxster S you can add £4,977 ceramic brakes or an £890 torque vectoring differential. A sports exhaust is £1,473.

The Porsche Boxster has set the roadster benchmark ever since the original burst on to the scene in 1996. The third generation is better than ever, and is our current roadster champ. It's definitely one of the finest sports cars money can buy. It’s a joy to drive, but it’s also practical, comfortable and refined. It looks great, has an upmarket cabin and offers all the performance you could need. Plus, it’s cheaper than the Lotus and holds on to its price far better.

The Exige S Roadster is the fastest convertible Lotus has ever made, and it brings fresh appeal to the Exige. It’s the same price as the coupe, and it promises the same sharp handling and searing performance, so it’s hard to see why you wouldn’t choose the roadster over the hard-top. So, If you want serious performance mixed with open-top motoring, the Exige S Roadster delivers.