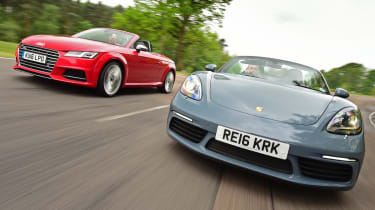 Porsche is no stranger to controversy. In the past 10 years or so, it has rocked diehard fans by launching SUVs and a luxury saloon. It followed up these additions with the news last year that its legendary 911 would feature only turbocharged engines. Yet even these bombshells paled into insignificance when Porsche revealed that the Boxster had ditched its traditional flat-six in favour of a turbo flat-four.

However, with even more power and greater efficiency, these new powerplants promise to give the Boxster serious potential. Add in sharp new looks, a new name (718 Boxster) and revised suspension, and the new model promises to be the best ever. Porsche has also shuffled the line-up, so the newcomer sits above the Cayman coupé. There’s a small price increase, which puts it in line with the Audi TTS Roadster.

The stylish TT has more power than the Porsche, four-wheel drive and more kit, and makes a compelling case for itself. Plus, it looks superb and is great to drive. So which of our high-performance drop tops will blow its rival away? 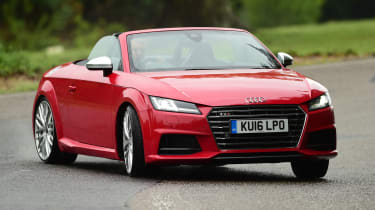 Our contenders are two-seater roadsters, but that’s where the similarities end. The Porsche is powered by a mid-mounted turbocharged flat-four that drives the rear wheels, while the Audi takes a very different approach. At the front is an in-line four-cylinder turbo that’s paired with a Haldex-controlled all-wheel-drive transmission. 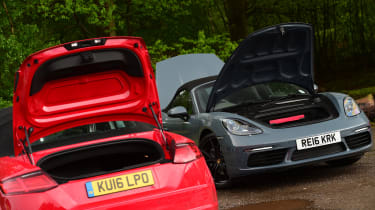 TT’S 280-litre boot is larger than its rival’s, but the load bay has a smaller opening and is harder to access. Meanwhile, the Boxster’s front and rear compartments are much easier to get to, and crucially, neither car’s carrying capacity is reduced with the roof stowed.

A six-speed manual is standard on both cars, but you can opt for an auto. Yet while the Porsche’s £1,922 seven-speed PDK twin-clutch draws you away from the action, the Audi’s crisp £1,365 six-speed S tronic is a better bet than the vague manual box. 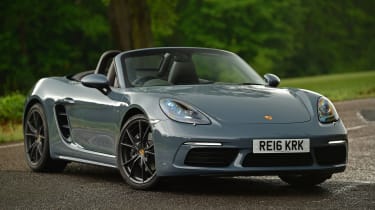 Any fears that a switch to four cylinders has ruined the Boxster are unfounded. Yes, the new engine doesn’t sound as good as the old flat-six, but it’s more efficient and delivers stronger pace. Plus, the rest of the car is better than ever, with sharper looks inside and out and sublime handling. There’s not as much kit as you’d expect at this price, but that doesn’t stop the brilliant Boxster taking a dominant win. 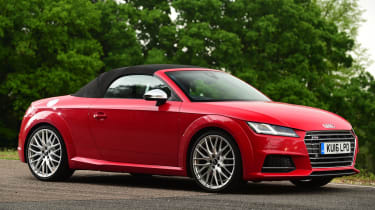 Latest TT is the best yet, combining stunning looks with great performance and one of the best interiors in the business. Composed handling and terrific all-weather security add to the Audi’s appeal, as does the generous list of standard kit. Yet while it’s great to drive in isolation, the TTS can’t match the Porsche for outright ability and driver involvement. 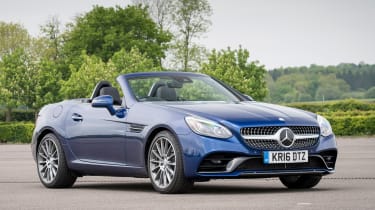 New SLC doesn’t have the sharp handling or outright pace of our test duo, but scores on everyday usability with its metal folding hard-top. A classy interior and smart lines give the Mercedes plenty of kerb appeal.