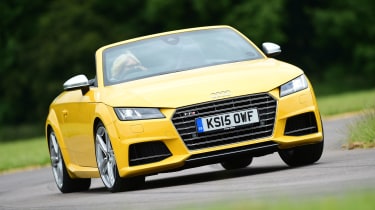 In terms of looks, performance and upmarket appeal, the  new TTS Roadster has the  Boxster covered. It’s also better equipped and more cost effective to run, while its quattro all- wheel-drive system adds the bonus of all-weather security. However, for ultimate driver thrills and engagement, the TTS still cannot quite match the mid-engined Porsche.

With summer in full swing, Audi has lifted the lid on its brilliant flagship TTS. Boasting the same 306bhp 2.0-litre turbo engine and four-wheel-drive layout as the fixed head machine, the new Roadster has the Porsche Boxster firmly in its sights.

Roof up or down, the sharply styled Audi has its German rival beaten for kerb appeal, particularly when finished in the vibrant Vegas Yellow of our test car. Better still, the triple layered and powered fabric hood can be raised and lowered in just 10 seconds and at speeds of up to 31mph.

With the roof stowed, you’re closer to the noise from the TTS’s four tailpipes. The turbo four-cylinder doesn’t sound as charismatic as Porsche’s flat-six, but there’s a purposeful burble at idle and meaty growl when accelerating, while cars equipped with the S tronic twin-clutch gearbox emit a distinctive exhaust flutter between rapid-fire upshifts. 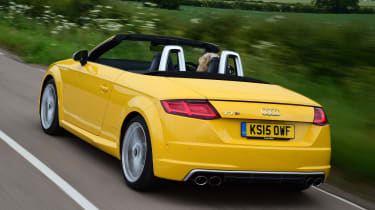 As you’d expect from an engine delivering 306bhp and 380Nm of torque, performance is blistering. The combination of launch control and quattro four-wheel drive allows the TT to rocket from 0-62mph in just 4.9 seconds, but it’s the relentless mid-range acceleration that really impresses. Even in sixth gear the TTS pulls hard, letting you blast past slower traffic in the blink of on an eye.

Happily, the Audi’s power is matched by impressive composure on a twisting back road. Like all models underpinned by the VW Group’s MQB platform, the TTS feels responsive and planted through a series of corners. 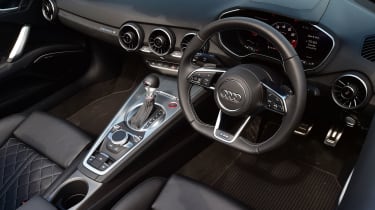 There’s a tiny amount of flex in the bodyshell over bumpy surfaces, but the quick steering, strong grip and unbreakable traction mean the Roadster is hugely confidence-inspiring in all conditions, while the standard ‘magnetic ride’ adaptive dampers allow you to choose between cast- iron body control when driving quickly or a smooth ride when you want to cruise.

It’s ultimately not as involving as a Boxster, but it comes closer than any TT Roadster before and in terms of ultimate point-to-point pace the Audi is every bit as fast.

Elsewhere, the newcomer is pure TT Roadster. That means a beautifully finished cabin, plus a special acoustic hood that comes close to matching the coupe for refinement.