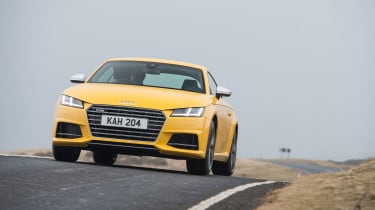 There's no doubt the TTS is  a desirable addition to the TT range, and a worthy challenger  to the Porsche Cayman. The badge and the extra power for roughly £3,500 more than the regular TT will prove irresistible  to the faithful, but keen drivers  are still likely to be swayed by  the extra fun the Cayman offers.

We’ve been consistently impressed by the new Audi TT’s dynamic abilities, so surely the model to make the most of them is the 306bhp TTS? We drove the range-topper on UK roads for the first time.

The four-wheel-drive-only TTS packs a reworked version of the TT’s 2.0-litre, four-cylinder turbo petrol and features a whole host of changes – from a larger turbo to a new aluminium cylinder head.

Plant your right foot and the TTS goes from 0-62mph in 4.9 seconds, and on to a top speed of 155mph. Opt for the six-speed S tronic auto for an extra £1,480, and you’ll hit 62mph three-tenths quicker, thanks to a gearbox that goes through the ratios like gunfire. 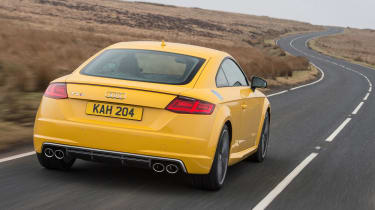 As with other models, the quattro four-wheel drive isn’t as nannying as it was on the previous TTS. There’s still loads of grip but, while the previous TTS was prone to understeer, the new model powers through corners with a neutral stance. Flaps in the exhaust that open under hard acceleration heighten the sense of drama, too.

For just under £39,000, the TTS gets LED headlights, heated leather sports seats, a special Virtual Cockpit – with a Porsche-like central rev counter – and Audi Magnetic Ride, which allows the driver to alter the suspension set-up. Other changes include a new front grille, four exhaust pipes and unique colours, such as our test car’s Vegas Yellow. 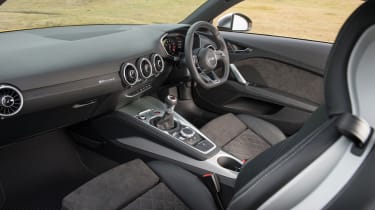 The step up from a 227bhp TT 2.0 TFSI S line quattro S tronic to TTS will set you back £3,455 but, while some will happily shell out for the ultimate TT, for us the lesser-powered car offers a better blend of performance and handling.