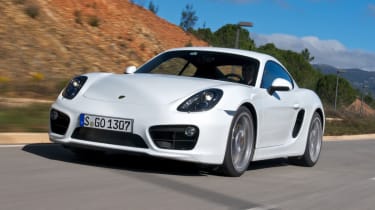 Porsche could have a real problem on its hands with the brilliant new Cayman S. Not only is it as fantastic to drive and as quick as the firm’s flagship 911 Carrera, it undercuts its legendary brother by nearly £24,000. When you look at it like this, the Cayman is actually one of the performance car bargains of the year.

Business is booming at Porsche. In January alone, the firm’s global sales were up a massive 25 percent over last year. So now is as good time as any to launch a new Cayman.

Promising to be faster, even better to drive and more efficient than its predecessor, the sleek mid-engined coupe is aiming to go straight to the top of the sportscar class. There’s no denying the newcomer looks the part.

In profile the Cayman is remarkably similar to the outgoing model, but it’s now lower and wider, giving it a more aggressive stance. Our range-topping Cayman S also benefitted from an eye-catching twin exit exhaust and large 19-inch alloys.

Yet it’s under the car’s skin that you’ll find the biggest changes. The extensive use of aluminium and high strength steel has helped reduce weight by around 30kg, while a longer wheelbase and wider track promise even greater composure in the corners. There’s also an all-new engine line-up, with the entry-level £39,694 Cayman getting a 271bhp 2.7-litre flat-six and the racier £48,873 S benefitting from a muscular 321bhp 3.4-litre unit.

On the move, the new Porsche is quite simply sensational, particularly on twisting back roads. Thanks to its motorsport-inspired mid-engined layout, the Porsche always feels beautifully balanced, while the dizzying levels of grip allow you to attack corners with confidence. Better still, the new electrically assisted steering is beautifully weighted and full of feedback. Powerful and progressive brakes, rock solid body control and a precise six-speed gearbox complete the dynamic masterclass.

Buyers can also opt for the firm’s £971 PASM adaptive dampers and the £1,084 Sport Chrono package, which includes a Sports Plus mode that delivers razor sharp settings for the throttle and suspension. There’s even a neat function that automatically blips the throttle on downshifts.

As you’d expect, the Cayman S is an explosive performer. The six-speed manual car will blast from 0-62mph in only 5.0 seconds, while models equipped with the £1,922 seven-speed PDK twin clutch gearbox require only 4.7 seconds. Whatever transmission you choose, you get the same spine-tingling howl from the engine. There’s also the option of a £1,473 Sports exhaust, which adds to the dramatic soundtrack with plenty of pops and bangs on the overrun. Yet there’s more to this Porsche than undiluted driving thrills.

When you just want to cruise, the Cayman is remarkably refined and user-friendly. The ride is firm but far from uncomfortable, plus there’s very little wind and road noise. And the all-new cabin now rivals the Porsche 911 for upmarket appeal, thanks to its top notch finish and high quality materials.

There’s also more space than before for driver and passenger, plus a combined luggage capacity of 425-litres, which is split between the deep front boot in the nose and the versatile hatchback at the rear. And while it’s faster than before, the new lightweight Cayman is now 15 per cent more efficient, promising fuel returns of 32.1mpg and CO2 emissions of 206g/km.

On this evidence, the new Cayman S can easily lay claim to the title of Britain’s best sportscar.