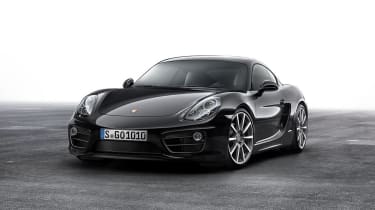 Porsche has unveiled a new Black Edition of its Cayman sports car, and it's the biggest sign yet that the the new facelift model is on the way. On sale now, the Porsche Cayman Black Edition gets a host of extra equipment and all-black detailing, starting at £45,989 for the base 2.7-litre engine.

The Stuttgart firm has a tradition of launching a Black Edition model right before the unveiling of new facelifted versions of its cars. It did the same with the 911 earlier this year before the new all-turbocharged line-up appeared. Although we don't expect the updated Cayman and Boxster to hit showrooms until mid-2016, we could see it unveiled at the Geneva Motor Show next year.

You might've guessed the theme for the Black Edition. Deep black exterior paintwork combines with a black part leather interior to give it the ultimate stealth image. But, more importantly for some, the run-out special brings along a big chunk of extra kit to justify the £5,000 price hike over the entry-level Cayman.

Porsche's PCM infotainment and satnav system is thrown in, as are auto wipers, xenon headlamps, front and rear parking sensors, cruise control, the Sound package, a 'Sport Design' steering wheel and 20-inch alloys. It's available to order now, with deliveries at the end of the year.

Read our full in-depth review of the Porsche Cayman here...