The Porsche Macan gets the driver-focused GTS treatment. We drive it in the UK 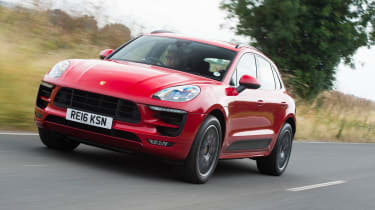 Yet again Porsche’s GTS modifications have created the sweet spot in the range. It’s more than £7,000 cheaper than a Macan Turbo, so if you’re after driver involvement but don’t want to sacrifice practicality, the GTS delivers. The performance on offer is matched to the chassis perfectly without compromising long-distance comfort or day-to-day usability. Sporty 4x4s don’t come much better.

The Porsche Macan GTS bagged a five-star verdict when we first drove it late last year, but that was on smooth European roads. Now the most driver-focused Macan has landed in the UK, does this still stand?

Porsche’s smallest SUV has always been a freak of a car – combining engineering wizardry that gives it performance to embarrass some of Porsche’s lesser sports cars, but usability and ride quality that tops the SUV sector.

Despite a 15mm drop in ride height and a stiffer suspension setup, the GTS still treads this line beautifully, offering staggering levels of grip and traction with a refined ride. It’s the GTS’s defining characteristic. 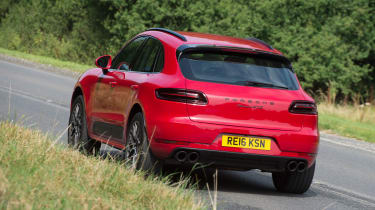 Porsche’s PASM adaptive dampers come as standard, and in Normal mode the Macan glides over the road – especially with the optional £1,004 air suspension fitted to our test car. Part of this is also down to the 20-inch alloys (21s are also available) but the standard rims come with taller tyres, which help deliver the GTS’s relaxed feel when cruising.

Push the Sport button and the car takes on a sharper character. Sport and Sport Plus for the dampers reduce roll in stages, keeping the GTS flatter in the bends. It compromises the Porsche’s composure over rough surfaces slightly, but it means you can carry outrageous speed through corners, with the Macan shrugging off its 1,895kg kerb weight.

Selecting Sport mode also releases a louder snarl from the standard sports exhaust. It amplifies the 3.0-litre twin-turbo’s V6 sound so it snarls when you squeeze the throttle and cracks on upshifts. 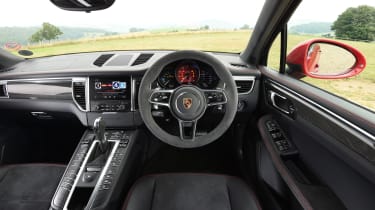 With 355bhp and 500Nm of torque it’s rapid, too. It might not have the immediate punch of the Macan Turbo, but there’s more than enough performance to keep things interesting. The 0-62mph sprint takes 5.2 seconds, or five seconds flat if you go for the £729 Sport Chrono Package. It’s not entirely necessary, as the GTS doesn’t lack pace, but this adds launch control and an even faster mode for the gearbox.

The steering is relatively uncorrupted for a four-wheel drive car, and there’s a decent level of feel for an SUV. But it’s the rate of response and weighting that makes the Macan GTS a delight to thread through corners. The seven-speed PDK dual-clutch auto is super smooth in the default mode, shuffling ratios imperceptibly.

In manual mode it snaps through the gears like a sports car, while four-wheel drive means you’ll rarely see the traction control light flicker as the engine pulls you out of tighter bends. 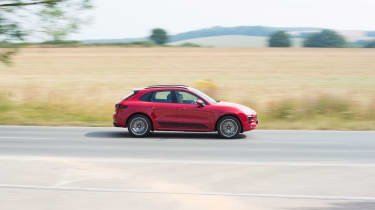 The GTS’s dual personality is reinforced inside. A 500-litre boot ensures there’s lots of luggage space, while the back seats offer enough room for all but the tallest adults. Neat touches like the GTS-embroidered head rests for the leather and Alcantara sports seats set it apart from the rest of the range.

Porsche’s next-gen infotainment system made its debut on the GTS, but sat-nav is a steep extra at £1,052 – on a £50k SUV it’s fair to say you’d expect this as standard. The clearer seven-inch touchscreen is more advanced than before and includes Apple CarPlay. It feels slick and nicely integrates your smartphone with the car.

Parking sensors, cruise control, lane departure warning, DAB and Bluetooth are all standard, while the GTS gets some extra styling elements such as smoked taillights, gloss black trim above the waistline and matt black rubbing strips below it. Satin black GTS badging and tailpipes complete the look.