The updated hybrid model will join the Panamera range, packing 455bhp and an all-electric range of 31 miles 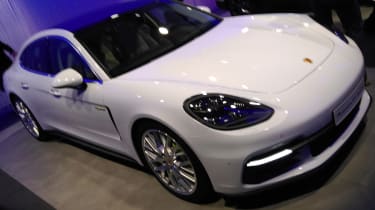 This is the new Porsche Panamera 4 E-Hybrid, which has made its way to the 2016 Paris Motor Show. Packing plenty of performance thanks to a 455bhp power output, the sophisticated drivetrain means that official CO2 emissions are just 56g/km and there's a claimed economy figure of 113mpg.

Porsche says that its hybrid lineup – including the 918 Spyder and 919 Le Mans car – proves that the term ‘hybrid’ doesn’t just mean economy and environmental sustainability, but can mean performance, too. A second, faster hybrid model is also in the works, though we don't have details on that yet. 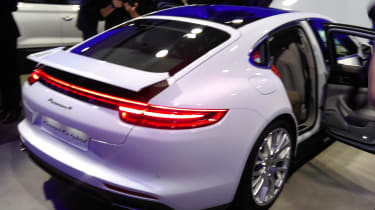 To that end, the new Panamera Hybrid works in a similar way to the 918, with the electric motor kicking in as soon as the driver presses the accelerator. That means the full complement of power – 134bhp from the electric motor and 321bhp from a twin-turbo 2.9-litre V6 engine – is available right from the outset. On the previous generation Panamera hybrid, the pedal needed to be depressed at least 80% of the way for the powertrain to give-up its maximum thrust.

Unlike a lot of hybrids, which are saddled with whiny CVT gearboxes, the Panamera 4 E-Hybrid benefits from an eight-speed dual-clutch PDK. This replaces the torque converter automatic of the previous model for faster response times and better efficiency. 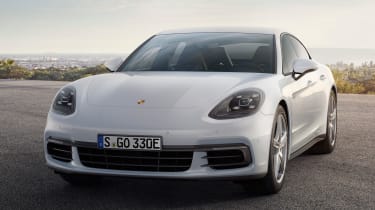 Several driving modes will be available. The Panamera E-Hybrid will always start in pure electric mode, but drivers can choose ‘E-Hold’ to maintain the current level of battery charge; ‘E-Charge’ to recharge the batteries while driving, and ‘Hybrid Auto’, which allows the car to choose its own power source. The Panamera E-Hybrid can travel up to 31 miles on electric power alone – enough to cross most cities without any exhaust emissions.

The usual complement of Sport and Sport Plus driving options remain, for ultimate performance rather than efficiency. 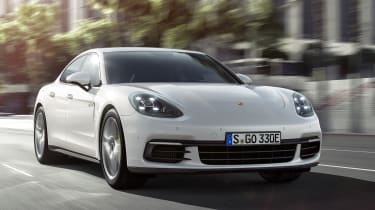 Elsewhere, the Panamera E-Hybrid benefits from the same upgrades made to the standard car. That means less divisive stying, a much improved interior with touch-sensitive buttons, and significantly improved refinement and comfort.

After its reveal at the Paris Motor Show, first European deliveries are expected to start in April 2017. No pricing information has yet been announced.

Do you think this hybrid Panamera will be as good as the conventionally-engined cars? Let us know in the comments below...

Welcome to our Paris Motor Show hub page. Scroll down for all our Paris content...
Visit New Toyota GR Corolla nameplate trademarked ahead of 2023 release 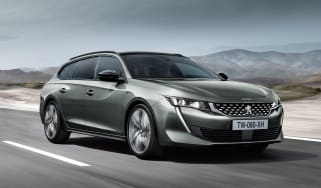