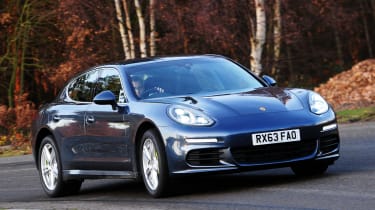 With the 918 Spyder hypercar and this Panamera S E-Hybrid, Porsche is forging ahead with groundbreaking plug-in hybrid technology. The E-Hybrid promises to deliver Porsche’s famous performance and handling with lower emissions and running costs.

The Panamera handles as well as a Porsche should, while quality is as high as expected and the equipment level is pretty good as well. Performance is strong too - you won't regret buying the hybrid model when you put your foot down to overtake.

With 91mpg and emissions of 71g/km of CO2, you won't regret buying one when you arrive at the petrol station either. It’s expensive to buy and lease, but it will go for up to 22 miles on electric power alone, and then act as a hybrid combining its electric motor with a 3.0-litre V6. Incredibly, company car tax for this car is cheaper than for a BMW 320d.

The E-Hybrid has been designed to offer the sort of performance you’d expect from a conventional V8 petrol. It pairs a 3.0-litre supercharged V6 engine with a 94bhp electric motor and a new 9.4kW lithium-ion battery, which has over five times the capacity of the previous car’s nickel-metal-hydride battery.

This combination produces a total of 410bhp, helping the Panamera do 0-60mph in 5.3 seconds with both its power sources working in unison.

However, it’s the smooth transition between power sources and the Porsche’s zero-emission running that really mark it out. If the battery is fully charged, the car will happily cruise at 70mph without troubling the petrol engine. And depending on how you drive, it will keep going like this for over 20 miles – far further than most big-selling mainstream hybrid models.

Even better, the switch between the two powerplants is really smooth and overall refinement is superb. With standard PASM adaptive air-suspension, the Porsche rides better than a Tesla Model S, even with optional 19-inch wheels, while the eight-speed tiptronic gearbox works well. It’s smooth in auto mode, but the manual settings give you the control you’d expect from a Porsche.

When you push on, the Panamera feels much sportier than the Tesla. The steering is faster and more accurate, while decent body control and communicative controls add to the impressive dynamic set-up.

Porsche has also improved the car’s brakes. While the transition from regenerative to conventional braking still upsets the purity of pedal feel, it’s much better than the first-generation hybrid, making it easier to brake progressively.

The Porsche recorded shorter stopping distances than the Tesla, too. The Panamera is agile and enjoyable when you want it to be, but refined and comfortable when cruising. It’s one of the most dynamically accomplished hybrids we’ve ever driven.

The Porsche Panamera qualifies for the Government’s £5,000 plug-in car grant, while its low company car tax bills are a massive selling point for business users.

A higher-band earner will pay just £1,779 a year – much less than for petrol rivals. With official fuel consumption of 91.1mpg, petrol bills should be refreshingly low for a performance car. We averaged 43.3mpg during our test, but we couldn’t charge overnight. The 20-mile electric range would almost certainly have improved the figure.

And thanks to the E-Charge button, you can also top up the batteries on the move and save silent EV running for low-speed town driving, allowing you to maximise fuel savings. The E-Hybrid is also one of the few models still exempt from London’s Congestion Charge.

Porsche’s evolutionary approach to styling has been applied to the latest Panamera. At a glance, you’d be hard-pressed to spot the changes, but look harder and you might notice new lights front and rear, plus cleaner lines along the sides. Yet it’s the smoother rear end, new bootlid, bigger rear window and repositioned bumper that are the biggest changes. Like all of Porsche’s hybrid models, the plug-in Panamera is marked by bright green on the badges and brake calipers.

Inside, the Panamera isn’t as futuristic as Tesla Model S, but it’s far more upmarket. The navigation screen seems tiny, but the mix of touchscreen and button controls works well, while Porsche’s traditional overlapped dials feature a TFT screen and needles in the same lurid green shade seen outside.

More importantly, the Panamera’s build quality is first-rate, while the plush cabin materials, smart lighting and a fantastic driving position mean it feels classy. As ever with Porsche, there’s an extensive options list, but standard kit is generous, including a multifunction steering wheel, sat-nav, leather heated seats, Bluetooth and cruise control.

There’s a decent amount of legroom in the back of the Panamera, but it’s strictly a four-seater, so bigger families might want to opt for a Tesla Model S.

However, with a 335-litre boot and fold-flat rear seats, the Porsche has plenty of luggage space, while decent stowage, big door pockets and a large glovebox mean the cabin is pretty practical.

The Porsche’s big advantage is that it’s not reliant on charging infrastructure. Plugging it in at home or at public charge points is useful, but not vital – you can use the engine to charge the battery – and you’re free from the Tesla’s range anxiety. That means it’s the better day-to-day choice for the UK at the moment.

Porsche dealers ranked sixth in our Driver Power 2013 survey, although the company placed 18th for reliability. The Panamera hybrid is into its second generation, though, so any problems should be ironed out, while development of the 918 Spyder supercar has helped Porsche improve its hybrid tech.

When it comes to safety, the Porsche gets eight airbags and there’s a host of optional active safety kit. Like Tesla, Porsche can fit a home charge point if you have off-road parking. 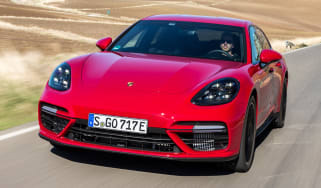 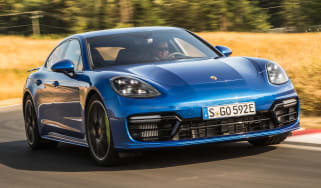 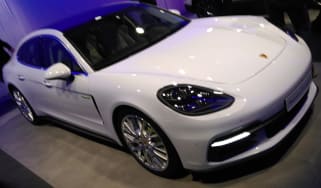 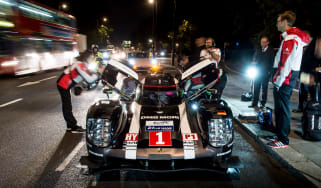