Which spray paint can will fix the scratches on your car? 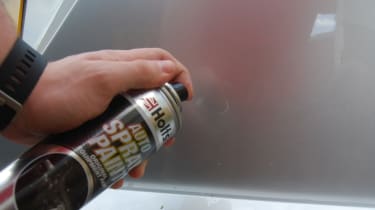 Minor scrapes can immediately make a car look scruffy, and all the elbow grease in the world won’t make a difference if the paint is damaged. To make the car look new again will usually mean a costly trip to the bodyshop, but sometimes it doesn’t seem worth it for a small part like a rubbing strip, sill cover or mirror case.

If you’re brave and patient enough, it’s easy to carry out the job yourself. After carefully preparing the area and making sure the part is either removed, or the rest of the car is masked off, you can get a decent finish using aerosol cans bought online or on the high street. Even rarer shades can be matched to the factory paint code by using the car’s chassis number. We tried six paints to see which can could put the shine back into our car.

The Ford original paint is the one we’d choose if we wanted to make sure that we got the best match to the existing factory colour. It also had a decent finish straight from the can.

The Hycote gave an impressive colour match, too, and it proved a bit tougher than the Ford paint in our damage tests. But the price of these products could be a blocker, especially if you’re looking to cover a bigger area of repair.

As a result, they both finished our test with recommended rosettes, while the Halfords paint took the Best Buy award for being a decent all-round package. 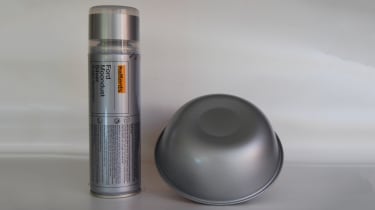 Halfords branches carry a decent range of paints to cover the most common makes and models. Be warned, though, the firm’s in-store range only seems to cover cars that are now around a decade old, so you’ll have to get a special order for something newer.

However, if you are lucky enough to find your shade on the shelf, the paint is an excellent all-rounder. It might not match the original shade as well as the Ford or Hycote, and it needed a polish to make it really shine, but it had the toughest shell we tested, and is decent value too. 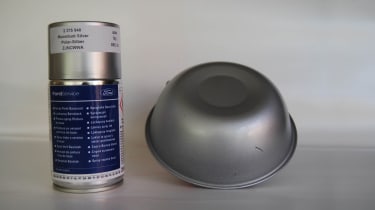 We are always told that genuine parts are best, and at this price we’d want them to be. The Ford paint costs £25 for a can, and it isn’t huge, either, at just 250ml. But the quality shines through, with the best finish and colour match straight from the can, even without rubbing down between layers.

The nozzle helps you to get the most out of the precious paint, too, with a fan-type spray pattern that makes it easier to aim for the bits you want to cover. Our only worry was that the finish seemed a little soft in our scratch test. 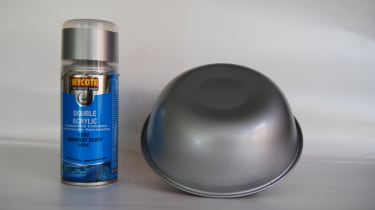 Hycote is one of the most commonly available aerosol paints, and it’s likely to be this brand you stumble across in many high street accessory shops. It’s not cheap, though; ours cost £8.40 online for a tiny 150ml can that’s just about enough to cover one door mirror with three coats.

The colour match was decent, though, with just a very slight yellow tinge that pushed it behind the Ford in the shade stakes. The ‘Double Acrylic’ finish was tough, too. A decent paint that could have been in the top spot if it had offered better value. 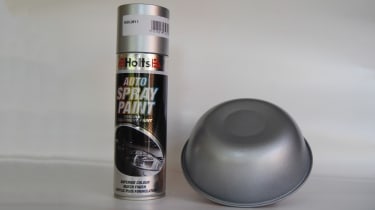 Holts is another familiar brand that you’re likely to find in a high street shop, and it seems good value at under seven quid for a 300ml can; that undercuts even the Halfords own-brand paint.

This had more glittery sparkle than the others here, which looked attractive on our sample, but didn’t actually match the size of metal flakes in the original factory paint. The final finish was quite soft, too. It would probably be possible to get a decent result with greater preparation between coats and longer curing times, but rivals are easier to use. 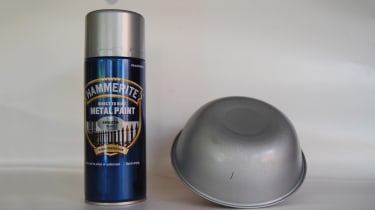 It was perhaps unreasonable to include the Hammerite spray in our test, because it does not claim to be a perfect colour match. But it looked as though it could be near enough, and it has the massive advantage that you can skimp on preparation, and even spray it directly onto rust with no undercoat.

The colour turned out to be reasonably close to the original in our case, but it was far from the shiniest finish, and wasn’t as tough as we expected, either. It would be perfect for less visible areas that would be difficult to prepare, such as sills, floors and inner wheelarches. 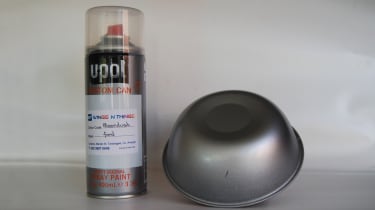 U-POL paint is mixed to order, so it can be matched to the code of your car, no matter how rare. Ford Moondust Silver is common, though, so the longer delivery time and cost of a paint like this won’t make sense if you can find it on the shelf from other sellers.

Like the Ford paint, the can has a fan-pattern aerosol nozzle that made accurate spraying much easier. The finish was disappointing, though, with a blue tinge to the shade, and a flat appearance that could only be brought to a shine with a lot of polishing between coats.