The Cup is one of the most involving hot hatchbacks money can buy. 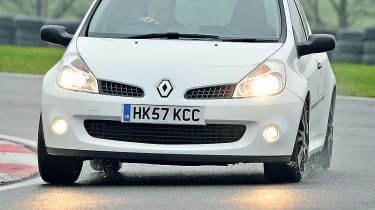 Driving On twisty roads, the Cup is a thoroughbred hot hatch. There’s a hard-edged, race-inspired accuracy to it. Body roll is virtually eliminated and there’s masses of grip, which makes it very reassuring to drive at the limit. It turns in quickly too, but the slightly artificial assistance isn’t as pure as other more communicative rivals. While there aren’t huge differences between this and the standard 197 chassis, either, it does feel more finely honed, and grip levels are even higher. The firmer damping hasn’t affected the ride, though: it’s still harsh around town and jittery on the motorway. The 2.0-litre engine remains inflexible, too: you have to work it hard. But the racy nature is exciting, as is the howling, buzzing engine note all the way to the 7500rpm redline.

Marketplace With its wider front track and bulging wheelarches, the RenaultSport Clio 197 is one of the most attractive and purposeful hot hatchbacks around. To the rear diffuser and vents behind the front wheels, the Cup drops the ride height by 7mm, though our test car included the optional roof-mounted spoiler taken from the race car. Add in optional while paint and black wheels, and the Renault looks stunning. Priced £1,000 below the standard 197, the Cup is designed for those who value driver appeal above all else – and loses key standard equipment to save weight. None of this, apart from the lack of air con, matters: and that can be added for £525. More importantly, stability control is standard. Rivals include the Vauxhall Corsa VXR, Peugeot 207 GTI and MINI Cooper S, but no competitor offers such a focused, stripped-out alternative like the Cup.

Owning The Cup’s more basic interior is the same as in entry-level Clios, which means you lose keyless entry and starting, plus the soft-touch plastics of more luxurious variants (and the standard 197). The basics are spot-on though. The seating position is excellent, with a broad range of adjustment on the wheel and well-placed pedals and gearlever. The optional Recaro seats are fantastic, too – a real must-have. As they’re mounted low, there’s ample space around the driver as well. Retained values are impressive, with the Cup holding on to over 45 per cent of its list price: that’s the same as some premium saloons. The Clio’s economy won’t win any awards, though; the official figure is 33.2mpg, and it averaged 27mpg during testing with us.