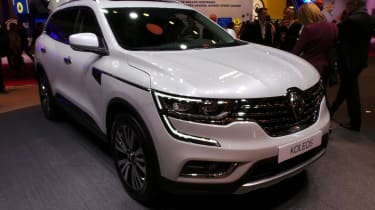 Renault has confirmed its new flagship Koleos SUV will be priced from £27,500 in the UK. First deliveries of the Kia Sorento rival will begin this summer.

Stepping up to Signature Nav – which is priced from £29,800 – and you get larger 19-inch alloys, LED headlights, a full leather interior, an 8.7-inch displayand an electrically-powered tailgate.

The arrival of the Koleos will mark the completion of Renault’s overhaul of its entire line-up, a process which first began when design boss Laurens van den Acker refreshed the Clio in 2012. Renault’s Paris show star, the Trezor concept, hints at what the future has in store beyond the Koleos. 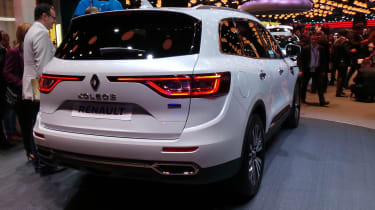 The new SUV will be placed above Renault’s other SUVs - the Captur and the Kadjar - and will focus on rear-seat space and practicality, a recipe sure to appeal to family buyers. This is a case that will only get stronger if the possibility of a seven-seat version is realised at a later date.

In terms of styling, the Koleos  takes on Renault’s new family face with C-shaped LED headlights merging into the large, chrome-slated front grille. In profile though, the new SUV shows its inflated size and is unlike any other Renault that has come before it.

In this sense Renault has tried to soften the impact with a window-line that kinks at the rear for a sleek look, and the high roof should ensure ample space inside. And with 213mm of ground clearance, the car will have a ‘real all-terrain ability’ according to the Koleos’s creators.

At the rear wide taillights stretch left to right, making the Megane’s influence clear. However the Kadjar’s bumper-mounted numberplate has been shifted to the bootlid, with two exhaust pipes completing the look. 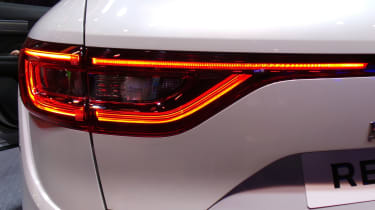 While Renault showed off the Koleos in its range-topping Initiale Paris trim, this particular version will not be available when the car goes on sale in the UK. Having said that, top-spec Koleos models feature the same portrait, tablet-style touchscreen system currently in the Megane and Scenic, as well as leather seats and sophisticated digital dials.

When it comes to practicality, the Koleos is impressive. A 624-litre boot is 39 litres larger than the one you’ll find in a Hyundai Santa Fe, and Renault insists that the newest member of its range boasts a total load volume of 1,690 litres with the rear seats folded away. An extra 35 litres of storage space is dotted around the cabin, 11-litres of which are contributed by the sizeable glovebox. Knee room of 289mm is among the most generous in class. 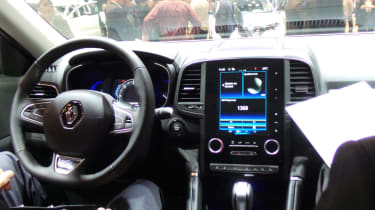 Under the bonnet, the Koleos shares much of its mechanical structure with the Nissan X-Trail.  The 1.6-litre dCi diesel is expected to be the most popular with customers, combined with either a six-speed manual or an X-Tronic automatic gearbox.

As is normally the case with Renault, safety will be a key selling point. Active Emergency Braking, Lane Departure Warning, Traffic Sign Recognition and Tiredness Detection will all be available, together with Automatic High/Low Beams, front and rear parking sensors and a rear-view camera.

Despite its size and targeted rivals, the car will only come with five seats when it is launched. However, Renault’s Chief competitive officer Thierry Bolloré has previously said that seven seats were never the priority. “The car is ready and we expect it to be on the market by the end of the year”, he told us. “But it is not a seven-seater.” 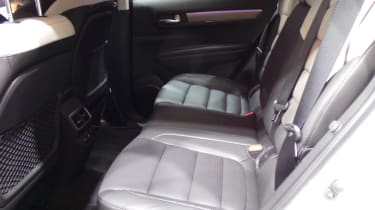 Asked why that is the case, he replied: “It is a good question and one we are questioning for ourselves at the moment. That doesn’t mean it will never happen, but for the moment it won’t have [seven seats].” Bolloré added that the car has been designed in such a way that adding two more seats “would be possible” at a later date.

Renault believes the Koleos is ‘destined for a global audience’ with sales kicking off in Australia, Turkey, the Gulf states and some Latin American markets in the third quarter of last year. It doesn't arrive in showroom in Russia and Europe - including the UK until this summer.

What do you think of the Renault Koleos? Let us know in the comments below... 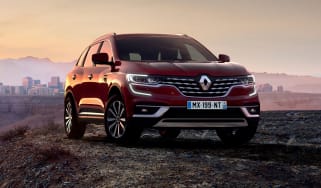 The facelifted Renault Koleos is here with refreshed styling, a reworked interior, a pair of new diesel engines and a base-price of £28,195