Renault's latest sport-tourer estate has arrived in the UK. 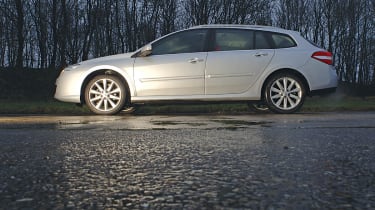 Renault offers two diesel powerplants in the Laguna line-up, with outputs ranging from 108bhp to 173bhp. The 150 version of the 2.0 dCi is the best balance of decent performance and fuel economy, plus it’s the only example available with an automatic gearbox. However, the Laguna is still outclassed by rivals such as the Ford Mondeo, which is far larger in terms of boot and storage space, and boasts greater driver appeal.

Despite its radical looks and upmarket interior, the new Renault Laguna has struggled to make an impression in the family car sector. But could all this change with the UK arrival of an estate version, or Sport Tourer as the French company labels it?

Improvements in the quality of the interior, plus prices which are £300 cheaper than the outgoing model, certainly appeal. Add in a new three-year, 100,000-mile warranty and the Laguna looks like an attractive deal.

The new model has an extra 33 litres of boot space over the previous Laguna estate, and is 80 litres larger than its big rival, the Peugeot 407 SW. Unfortunately, that’s not enough to match the class-leading Ford Mondeo, with 554 litres, but the load design is clever, with two large side pockets and buttons that automatically fold down the rear seats.

There’s a dedicated storage space for the parcel shelf, while the tailgate opens wide and is ideal for boxy objects once the seats are folded flat.

But what could put potential buyers off is the ungainly styling. While it undeniably has what it takes to turn heads, the odd nose is far from attractive. The Sport Tourer has a neat, if uninspiring back end, but another problem comes behind the wheel. Poor ride quality is the biggest criticism, detracting from the Laguna’s reputation as a relaxed cruiser.

The slack gearbox is a further letdown, and there’s kickback through the steering. While there’s plenty of grip, and it’s competent enough through bends, it still lacks polish.

So what about the engine? The 2.0 dCi comes in 130, 150 and 175 versions, but in everyday driving there is little to choose between the top two variants. The 150 may have 40Nm less torque, but with 340Nm it’s no slouch, and is as smooth and hushed as the range-topping example.

In gear, it’s equally punchy, too, but returns better fuel economy. If only the rest of the driving experience could match up, then the Laguna would be a great estate car.

Rival: Ford Mondeo The impressive Mondeo remains king of the sector it helped define. With a capable chassis, upmarket interior and huge boot, it is still the motor to beat in the family car market. New and distinctive looks ensure real road presence, too.