Despite being six years old, the Ford Mondeo rival remains a popular buy in the UK market, with 110,000 examples sold so far. 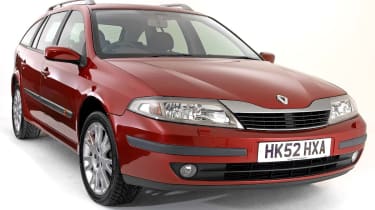 Family cars with flair are a Renault speciality, and the handsome Laguna is no exception. Despite being six years old, the Ford Mondeo rival remains a popular buy in the UK market, with 110,000 examples sold so far.

Generous kit and a carefully engineered accident protection system – it was the first car in its class to get a fivestar rating in Euro NCAP crash tests – mean it’s luxurious and comfortable.

Of course, buyers should beware of potential pitfalls, but a good Laguna is a cracking used buy. Whether you pick the five-door hatch or the stylish Sport Tourer estate, here’s the lowdown...

Despite the appeal of the turbo 2.0T, petrol Lagunas aren’t generally as desirable as the diesel variants. And given how good the dCi units are, anything running on unleaded makes little sense. Choose from Authentique, Expression, Dynamique, Privilège and rare Initiale specs. Buy at least a Dynamique, but make sure everything works properly – the more complex options there are, the greater the risk of problems.

Katherine and Steve Redfern from Droitwich, Worcs, bought their 2003 Laguna 2.0 Initiale when it was six months old, and they’re smitten. Katherine said: “Our Renault was great value for money, and it’s practical and economical – the best car we’ve ever had. It’s been very reliable, and we’re now looking to buy a V6 version. Even if we don’t find one, our next car will definitely be another Laguna.”

* Electrics: there are a number of potential problems with the Laguna’s electrics. Check sunroofs, windows and climate control systems thoroughly, as well as the tyre pressure monitoring system. A used car warranty will provide peace of mind.

* Gearbox: transmissions can also cause problems; clutches fail prematurely, especially on diesel cars. Meanwhile, second gear can become quite noisy on models with six-speed manual boxes – so take any buy for a decent test drive.

* Lights: Xenon headlights were offered as an optional extra on the Laguna range, and they are particularly effective, especially if you live in rural areas. However, the self-levelling system sometimes plays up, so make sure it’s working properly.

* Wheels: poorly surfaced roads and speed bumps are bad news for wheels. The more adventurous designs in the Laguna’s pretty alloy range can buckle, leading to a juddering steering wheel and uneven wear of the tyres.

* Engine: sluggish performance on 1.9 dCi diesel variants could be due to a sticky exhaust gas recirculation valve – which eventually leads to the destruction of the engine. It’s a fairly common problem, so keep an eye on this or you’ll be facing a hefty repair bill.

While service intervals vary according to the engine, schedules alternate between minor and major attention on all models.

Service intervals: pre-February 2005 Lagunas need attention every two years, but later cars are required to visit the main dealer every 12 months – mileage allowances vary, so check with your local franchise. A new cambelt is needed every 72,000 miles or five years, and all models have one, except for the 2.0 dCi.

Service costs: according to Hylton Renault in Worcester, owners should budget on £215 for a minor service and £370 for a major check. Replacing a cambelt will set you back around £350.

The Laguna is a gadget fan’s dream, with all versions having tyre pressure sensors, a card-style key and lots of kit. It’s ultrasafe, too, with anti-lock brakes, power-assisted steering and a raft of airbags fitted as standard across the range. Build quality is better than ever, but the electrics can still cause problems, so check everything works. Whether you choose the hatchback or estate, when it comes to value and stylishdesign, the Renault is a lot of metal for your money. WE LIKE: excellent comfort, generous equipment as standard, immpressive Euro NCAP crash test rating, sleek, attractive looks and affordable prices. WATCH OUT FOR: potential problems with the electrics, petrol engines are underpowered, high-mile repmobiles, Sport Tourer estate model short on space.