The Renault Laguna Sport Tourer isn’t desirable enough to cut it as a lifestyle option. 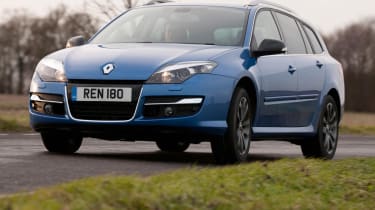 Driving The Sport Tourer is extremely quiet and well-insulated – on smooth roads at least. It’s obvious that the Laguna came nowhere near a British B-road when it was being developed. There’s too much rebound damping, which means that the springs over-react to even small bumps. This causes the whole car to feel jittery. Added to this is kickback and a lack of steering feel, plus a fair amount of body roll. Even though it has good grip and agility, it’s difficult to have full confidence in the Laguna’s behaviour. The popular 2.0-litre dCi diesels are more impressive though. They never feel strained or coarse, yet are impressively flexible; indeed, the 175 version is so good, it’s overtaken Honda’s 2.2-litre as the best engine in the class. Petrol units, by comparison, are average – and the six-speed gearchange is poor. The lever flexes under load and feels as if it has already covered 100,000 miles.

Marketplace We’re still not sure about the Laguna’s looks, but admit that the estate’s longer roof balances out the ungainly nose. The rear has more in common with the car it replaced, especially in the shape of the tailgate, but although it’s clean and tidy, we don’t feel it’s handsome enough to attract image-conscious ‘lifestyle’ customers. Available in four trim levels, with six engines, the Sport Tourer will take nearly half of all Laguna sales in the UK, and is up against the Ford Mondeo, Peugeot 407 SW, Honda Accord Tourer, plus premium models like the BMW 3-Series Touring and Audi A4 Avant. The Laguna boasts a 100,000-mile warranty, while very attractive pricing and healthy equipment levels are further positives.

Owning The Sport Tourer has a shorter, narrower boot than rivals, though it’s easy to use thanks to a low sill and possibly the simplest seat folding mechanism yet devised. It is also a long bay with the seats down, and is nicely finished. And spending time up front in the Laguna is no hardship, either - the stylists should be proud of what they’ve achieved. Quality is clear to see around the driver, where the soft-touch trim, matt plastics and sat-nav controls all seem solidly built. Carefully clustered switchgear and a simple instrument binnacle ensure the Laguna is easy to get on with. And there are some neat features too, including a standard keyless system that locks the car automatically as you walk away. The Laguna also boasts a five-star Euro-NCAP crash test rating. Retained values are more average though, but very good fuel economy from the diesels, plus lengthy 18,000-mile service intervals, should help keep running costs down.