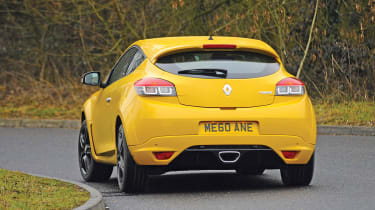 Few cars are as engaging to drive as the Renaultsport Mégane – and our biggest fear for this  version was that increasing the power would detract from the addictive driving experience.  Yet the talented chassis is more than capable of dealing with the added grunt, and there are rich rewards for anyone who opts for the remap. It also shows that if Renault wanted to launch a Mégane with extra power, there’s definitely a market for it.

You can read all about how the standard Renaultsport Mégane 250 fared in our twin test – but what happens when you turn the wick up? We tried this tuned version from Superchips to find out.
[[{"type":"media","view_mode":"content_narrow","fid":"69253","attributes":{"alt":"","class":"media-image"}}]]
For an extra £445, the Stage One package remaps the car’s computer, boosting power from 247bhp to more than 300bhp. That gives the Mégane as much punch as a Ford Focus RS.
The transformation process revealed a surprise, though – when we put the car on a rolling road, it was already producing 275bhp! After remapping the engine’s electronics, power leapt to 317bhp, while torque was also increased to 405Nm.The effect on performance was obvious – the souped-up Mégane immediately felt more eager. While acceleration off the line was stronger, the biggest difference was reflected in gear, with the time from 50mph-70mph being slashed from 9.3 to 6.1 seconds.
You might expect the extra firepower to make the Mégane more unruly in corners – but, surprisingly, torque steer wasn’t a huge problem. Although you can feel the front end snatching around more than before, it’s easy to control, with small adjustments to the throttle making a big difference at the front end. Our Cup chassis-trimmed car was still very stiff and had a harsh ride, though.
The Superchips remap also includes a handheld ‘Bluefin’ control system, which saves the engine’s factory settings, and means drivers can dial in extra performance when required.
The enhanced pace doesn’t transform the Mégane, but adds to its strengths. Downsides are likely to be worse economy – if you use the performance all the time – plus increased insurance costs. Yet it does make for a more exciting experience.
Share this on TwitterShare this on FacebookEmail