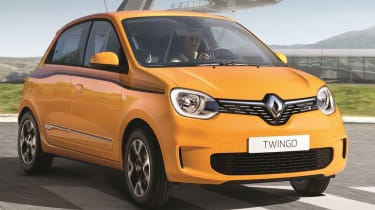 Renault has officially revealed an all-electric version of the Twingo city car. The compact city car will sit alongside its forthcoming range of E-Tech hybrid and plug-in hybrid vehicles, in addition to all-electric models like the Twizy and Zoe.

As predicted, the Twingo shares its powertrain with the Smart EQ ForFour - a car with which the Renault was co-developed. That means there’s a single rear-mounted electric motor sending 80bhp to the back wheels. The result is a 12.6-second 0-62mph time and an 84mph top speed.

But while the motor is the same, Renault has installed a larger battery than Smart. The 21.3kWh unit is 3.7kWh larger than the ForFour’s, and range has increased as a result - based on the WLTP cycle, the Twingo will manage 112 miles to the Smart’s 81.

The Twingo Z.E. uses a 22kW charging architecture, enabling a charge from zero to 80 per cent capacity in 63 minutes. Depending on the charger type, top-up times increase from there, up to a 13.5 hour charge through a three-pin plug.

It’s set apart from combustion versions by blue elements in the front grille, plus a matching pinstripe along the side and highlights on the alloy wheel centres. There’s also some subtle ‘Z.E. Electric’ badging on the rear and the sides.

The Twingo Z.E. will make its official debut at the 2020 Geneva Motor Show, before going on sale in Europe later this year. However, Renault has no plans to sell the electric Twingo in the UK.

What do you make of the all-electric Renault Twingo? Let us know in the comments section below…