As Rolls-Royce prepares a new 4x4, we drive the 1914 tank that set the blueprint for its forthcoming SUV 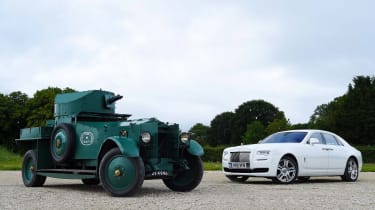 News that Rolls-Royce is planning a 4x4 comes as no surprise to historians of the marque. Thanks to the innovative spirit of the British armed forces, Rolls has one of the proudest off-roading traditions in the car business. The armoured car business, that is!

The earliest Land Rovers and Jeeps were still a generation away when the British armed forces called up the luxury Silver Ghost for military service in 1914. With specially commissioned 9mm boilerplate bodies installed at the Woolwich Armoury and suspension upgraded at the Derby factory, the Rolls-Royce was soon proving its worth from the jungle tracks of Asia to the deserts of the Middle East. 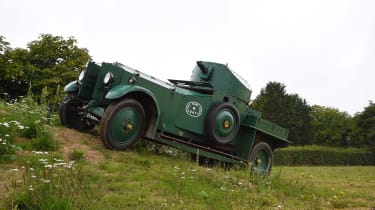 To help pass the time while we wait for the new off-roader, Auto Express took the latest Ghost II down to Bovington Camp in Dorset where The Tank Museum maintains one of the only two surviving, original armoured cars in pristine running order.

Nothing immediately obvious connects the contemporary Ghost to the olive-green fighting machine – a 1920 pattern Mk1 Rolls-Royce Armoured Car – when we park the two cars together. The military-spec Silver Ghost doesn’t feature the famed Spirit of Ecstasy mascot, and even the Rolls-Royce radiator badge is hidden behind a set of armoured doors. Both cars have an immensely imposing presence, though, and share a state-of-the-art approach to engineering on which the Rolls-Royce reputation is built.

• Is Rolls-Royce Cullinan a better name than Bentley Bentayga?

The specifications of the two vehicles are fun to compare. They’re both over five metres long, with front engines and rear-wheel drive, but the new Ghost II doubles up the number of cylinders and gear ratios. The modern Ghost’s mid-teens ‘real world’ fuel consumption doubles the 8mpg the armoured car achieves, too – which isn’t bad, considering it boasts a massive 563bhp from a 12-cylinder, 6.6-litre BMW engine that hurls the car from 0-60mph in 4.8 seconds. 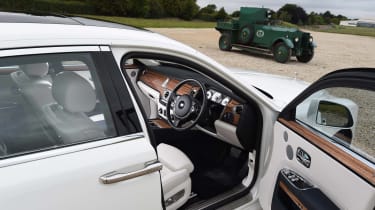 As the five-tonne armoured car is twice the Ghost II’s weight, makes just 80bhp from its enormous 7.3-litre straight six and has just four gear ratios, it does well to crack 60mph at all…

While armour, machine guns and rapid mobility may have felt like luxuries to combat crews in the desert, the accommodation certainly wouldn’t have. Only the driver has a seat inside the cramped fighting compartment, so the gunner had to kneel to operate the Vickers .303-calibre machine gun while aiming the turret. The commander hunkered down on the floorboards beside the driver to peer out of the viewing slits. 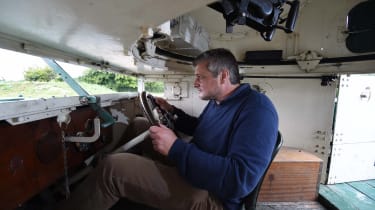 With the rest of the space filled with weapon racks and magazines, racing over a bumpy desert at 60mph must have been a bruising experience. The heat would have been stifling, too, but the crew could sit outside on the wooden toolboxes in the open rear tray during non-combat operations.

The first hurdle for our own drive experience is getting aboard. Climbing over the tailgate, a pair of small doors open into the fighting compartment from the rear tray.

You slide in feet first before shuffling into the floor-level driver’s seat, most likely bashing your head on the turret metalwork or the Vickers machine gun mount inside. 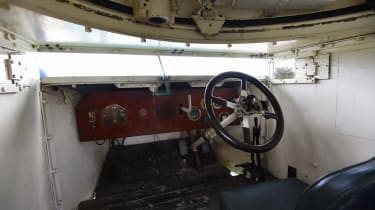 Legs stretched forward on to the pedals, it’s time to take a look around. The cabin feels airy from here with lots of headroom, but the view out is severely restricted. Raising the armoured visor improves things immensely but the side viewing ports are minuscule, and careful reversing requires the help of a crewman.

Otherwise the scene is familiar vintage car territory – a plain wooden dash sprinkled with dials for speed, fuel, oil pressure and amps, a thick-rimmed four-spoke steering wheel with ignition levers, and a clunky H-gate lever for the ‘crash’ gearbox nestling next to the handbrake by your right thigh. There’s a big lever sticking out of the dash that opens and closes the armoured doors over the radiator, and a lever in the floor next to the clutch allows you to switch from silenced to open exhaust. 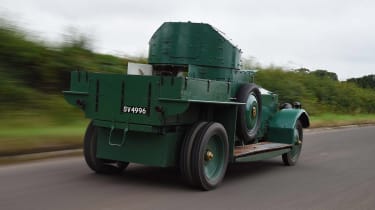 “She’s a good old girl, never lets you down,” says Bob Nelson, the Tank Museum’s workshop foreman. He takes us for a demo, making impressively slick changes up and down the crash box, and then it’s our turn.

The engine idles smoothly as we sit behind the wheel – it wasn’t known as the Silver Ghost for nothing – but there’s a knack even to selecting first. The gearlever has a release handle on top that needs to be squeezed, and the H-gate is complicated by indents that keep the lever in every gear. With no synchromesh, double-declutching is the order of the day, but even then it’s difficult not to grind the gears. The process takes so long that it’s hard to maintain vehicle speed between changes at first. 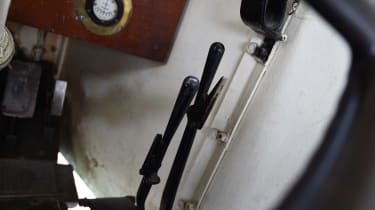 The secret seems to be skipping gears, or simply staying in third as the torquey engine will pull from what seems like walking pace. The weight of the car seems to slow it down more than the rear-wheel-only brakes and the steering requires elephantine effort at slow speeds, although it lightens up when the car’s underway. Even on an unprepared surface, the ride is surprisingly smooth, and the quiet engine lives up to the Silver Ghost’s reputation out on the road.

Piloting this once groundbreaking fighting machine on difficult terrain in wartime must have needed skill and mechanical sensitivity as well as bravery. Thanks to all-terrain-sensing electronics and clever powertrain technologies, the new Rolls-Royce off-roader is expected to make no such demands of its driver.

The Rolls-Royce armoured car at war 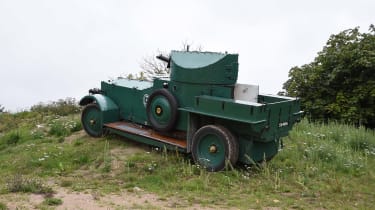 Works Rolls-Royce Silver Ghosts had proven their reliability by winning the fearsome Alpine Trial of 1913, so it’s no surprise the military took an interest.

As early as 1914, members of the Royal Naval Air Service (RNAS) in Dunkirk had added protective boilerplate to a trio of privately owned cars – one of which was a Rolls-Royce 40/50hp model. The RNAS used them for reconnaissance sorties against the Germans, and the new armoured car concept quickly found favour in Whitehall. The First Lord of The Admiralty, Winston Churchill, personally signed off an order for the first 18 armoured cars based on Silver Ghost chassis.

But, even as the first cars were being delivered, the fighting in Europe was bogged down in trench warfare. While the Western Front proved unsuitable for a lightly armoured car, the Rolls-Royces saw duty from Gallipoli to India and Shanghai. They were outmoded by the outbreak of WWII, but some fought in Africa, while others ended active service in defensive roles with the Home Guard.

On track to a history of fighting vehicles 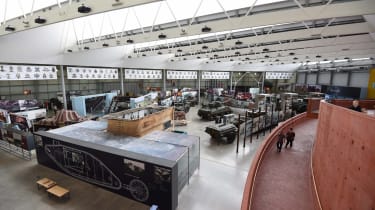 The Tank Museum’s collection of tanks and armour is widely recognised as one of the most important in the world, making the attraction a great day out. Exhibits at the site at Bovington, Dorset, include the world’s first tank, Little Willie, plus Challenger 2 – the UK’s current battle tank. The fascinating fighting vehicles are drawn from the last century, with interactive exhibits and displays from the WWI trenches to Afghanistan. Plus, a display arena lets you see the vehicles being put through their paces. 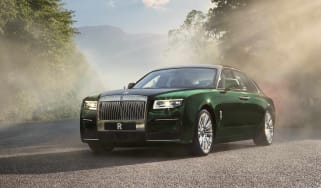