SEAT up the ante in the economy battle with its new green star the Ibiza Ecomotive - capable of over 80mpg. 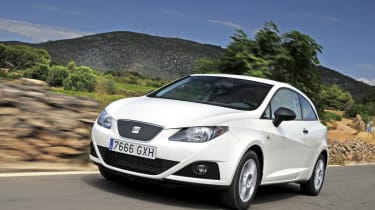 The latest incarnation of the Ibiza Ecomotive is one of the most accessible green cars yet. Its low price and mile-munching capability make it a great choice for anyone eager to cut costs to an absolute minimum. Other eco superminis strike a better balance between driver involvement and efficiency savings, but few can compete with the Ibiza’s headline figures – while the ‘ST’ estate version makes it practical, too.

Four-seater family cars don’t get any greener than this! Sporting a new engine and incredible fuel economy of 80.7mpg, SEAT’s new Ibiza Ecomotive is matched only by the latest Volkswagen Polo BlueMotion, the car on which it’s based. We travelled to SEAT’s headquarters in Spain to see what it’s like from behind the wheel.

This model’s main aim is to improve on the long-distance refinement and low emissions of the previous car, and the figures speak for themselves. Superb fuel efficiency and rock-bottom C02 emissions of 92g/km are achieved by using a smaller, 1.2-litre three-cylinder diesel engine. This produces 74bhp and 180Nm of torque – a seven per cent drop compared to the old car, which extends the 0-62mph time to 13.9 seconds.

Alongside the new engine, additional fuel-saving technology has been added, including a Start&Stop system which cuts the engine in traffic, and regenerative braking. The aerodynamic bodykit is carried over, so the Ibiza keeps its blanked grille, front splitter and rear spoiler. Even the 15-inch alloy wheels have been designed to cut through the air as cleanly as possible.

As a result of this focus on efficiency, the engine isn’t great below 2,000rpm – it clatters and struggles to muster much forward progress. As your speed increases, though, the Ibiza gets punchier and refinement improves, making it surprisingly well suited to motorway cruising.

The steering is light and accurate, but the suspension is set up for comfort rather than grip, and the skinny low rolling resistance tyres easily give up traction if you approach a corner with too much pace.

Inside, the simple, functional layout is very user-friendly and solidly built, if lacking a little sparkle. There’s plenty of space at the front and back for passengers, though. Those after even more room can opt for the Sport Tourer estate model.

Specialised eco versions such as this often come at a premium, but the Ibiza will be one of the cheapest green cars on the market when it arrives in October. Even in SE trim – which includes alloys and air-con – it undercuts Ford’s Fiesta ECOnetic by nearly £2,000. Running costs will also be low, as the Ibiza is free from road tax, congestion charge exempt, and will be cheap to insure, making it an ideal first car.