Our compact estate has been travelling the length of the country... and impressing with its comfort and cruising ability 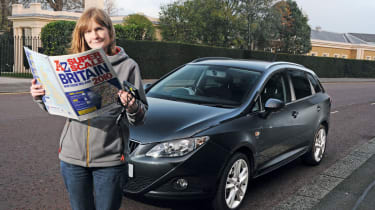 During the week, I rarely venture off the beaten track in our SEAT Ibiza, but a string of long-haul weekend trips has seen me thumbing my road atlas more often than usual. And I’ve not been the only one using the car to head further afield....

First, senior designer George Vedmore took the little estate on holiday to Cornwall. Then, road tester Paul Bond used it for a few airport runs. And when I got the keys back, I immediately took it on a whistle-stop two-day trip to the north-east.

The journey to our stop-off in York allowed us to experience how comfortable the SEAT is on the motorway. A misty morning on the Yorkshire moors followed, so we were grateful for the front foglights’ cornering function. They come on as you turn the wheel to illuminate the road at night, but as fog closed in on the A19, we switched them on permanently to boost visibility.

A cousin in Sunderland was having her son christened on Sunday afternoon, yet we had to be back in London for work on Monday, so we braced ourselves for a long night.

But OV11 ADZ didn’t let us down: despite six hours in the car, the supportive front seats were never uncomfortable, while the easily adjustable steering column made driver changes a simple process.

The smooth 1.2-litre turbo engine was up to the task, too, although the trip computer is a bit optimistic. It reckoned we averaged 45.7mpg over the 620-mile round trip, but our calculations suggest 38.8mpg is nearer the mark.

Still, that’s given the overall economy a boost. It now stands at 35.8mpg – which isn’t bad considering the car spends most of its time in gridlocked London.

Faults have been few and far between, but I’m keeping my eye on the lockable fuel cap. I’ve had problems opening it, so I tend to leave it unlocked. I assumed this was down to me, so I kept quiet. However, other drivers have reported a similar issue, so maybe there’s more to it after all.

Time will tell, but the Ibiza’s modest thirst for fuel means I’ll have a while to wait for the next fill- up to find out…

I’ve borrowed the SEAT for a few airport trips and it has been brilliant. I love its sporty styling and the huge boot is great for luggage, yet its supermini roots ensure that it is an absolute doddle to park.”Paul Bond, Road tester