Skoda adverts: seven of the best

Skoda special: We pick out seven of our favourite Skoda adverts, from the funny to the scary

Skoda has used some brilliant adverts over the years to boost its image in the UK. We've picked out seven of our favourites here - from the famous Fabia cake to the classic tagline: "It's a Skoda. Honest."

Possibly the most famous of Skoda’s most recent adverts, the Fabia cake was less of a promotion and more of a spectacle. The ad was set to the music of My Favourite Things, and lasted just over one minute, but it took a team of eight people a week to mould the car.

The rear lights were made of jelly, the engine oil was Golden Syrup and a Rice Krispie cake mixture was used to create the main panels, as it was easier to mould into the necessary shapes but also strong. For the whole creation the team used 180 eggs, 100kg of caster sugar and 20kg of raisins.

Best bit: The final squirt of icing to keep the badge in place and the excess being mopped up. It literally is the icing on the cake for this advert.

This 2013 ad publicised Skoda’s partnership with cycling rather than its cars, and shows how its models – mainly the Octavia – can handle the challenge of the Tour de France.

From the car scraping on the side of a canyon to a mechanic hanging out of the back to help a rider, plus the quick windscreen and panel replacement, it gives viewers a short glimpse into the life of a team car. And while things look tough for the pro cyclists, it shows the vehicles face their own punishments along the way.

Best bit: The tight angles of cyclists and car give a great idea of what goes on in the Tour de France, and the fast, foggy descent really stands out.

For this Octavia vRS ad, Skoda depicts a world of souped-up and supersized items – including the huge children’s trike above, a large ice cream van dishing out giant cones and a barbecue the size of a small hatchback. But the vRS gets all the attention.

The idea behind the commercial is that the hot family car has the looks of the regular model but the power of the vRS engine under the bonnet. And all the items in the promotion were working props – no computer trickery was involved. The ad finishes with the line: “Not your average family car” – alluding to the added power under the vRS’ standard looks.

Best bit: It's hard to pick out a favoured prop as they are all excellent, but the working super-sized trike and giant ice cream van – with its giant cones – are the highlights.

Rapper Xzibit is famed for turning old wrecks into blinged-up, tech-filled dream machines in TV show Pimp My Ride, and here he meets a driver who needs his ropey-looking hatch fixing. He gets to work on sorting out the beaten-up vehicle, smashing the windows and quickly removing the car’s top half.

But it soon becomes clear that Xzibit isn’t pimping this customer’s ride at all; what’s left of it is quickly towed away. Instead, the sheet is lifted to reveal a brand new Yeti. The final scene is of an array of Yetis lining up to replace customer cars.

Best bit: The fact it’s based on a well known TV concept makes this ad stand out – and the nonsensical attempts to improve the car provide some extra comedy.

In a parody of the standard Fabia cake advert, the Fabia vRS takes the My Favourite Things song and turns it into a heavy metal cover. To show off the hot hatch’s more ‘evil’ nature, various scary-looking workers add their own touches, including a knuckle duster-wielding panel beater, a poison-drinking, robotic-armed paint sprayer and a pair of vultures sculpting the framework of the car out of bone.

Motorbike tyre burnouts give the roof its black colour, while the engine is made out of a selection of snakes. The final touch follows the concept of the cake commercial, but instead of the icing being applied, a laser-eyed worker engraves the final ‘A’. This clever piece of promotion links cleverly to make it seem like a series.

Best bit: There are so many memorable moments in Made of Meaner Stuff, but the innocent, lost-looking worker from the cake ad – who is given a scare by a passing vRS worker – stands out. 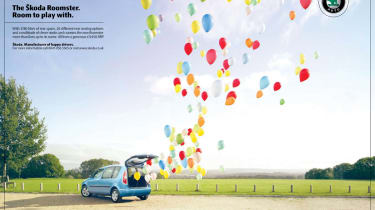 A print advert this time, which was used to promote and show off the Roomster’s practical side. Thousands of balloons are depicted floating out of the car’s cabin, and the tagline of “Room to play with” hints at the spacious interior.

Another version of this advert had thousands of Slinkys falling out of the rear of the car down some steps. It may not be the most memorable of Skoda’s latest promotions – after all, it’s hard to live up to the likes of the cake car or giant child’s trike – but it continues to show the brand’s progression.

Best bit: All these print adverts are striking and grab the attention with their use of bright colours – and the fact that the car is almost an afterthought...

Playing on the company’s traditional, supposedly ‘poor’, reputation in the UK, the ad starts with a contingent of stiff-upper-lipped Brits being shown around a factory. As the guide reels off facts regarding the number of machines and how the new car already meets emission standards, the lead guest seems incredibly impressed.

As the tour ends we see the finished Fabia, and the lead Brit tells the guide: “And I hear you make those funny little Skoda cars here, as well.” Then appears the final tagline: “It’s a Skoda. Honest.”

Best bit: Skoda was clever to play on its own questionable image, but the stereotypical upper-class Englishman and his final statement set it up perfectly.