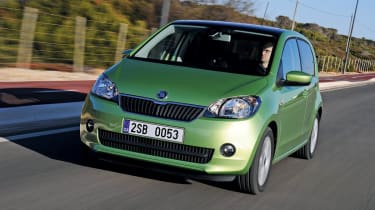 We love the three-door Citigo, and this five-door version is another hit. It simply adds a bit more flexibility to the car’s already impressive attributes. It’s just as spacious and fun to drive, should cost very little to run and is one of the best city cars ever built. The big difference over its VW up! sister car is the price – it will offer even better value for money.

We’ve already driven the five-door VW up! and given it full marks – but now Skoda has brought out its own version. Is this the pick of the Volkswagen Group’s new city car line-up?
The five-door Citigo joins the three-door, and squeezes an extra pair of doors into the same 3.5-metre body length – as in the up!. Also identical is the 251-litre boot, which expands to 959 litres with the rear seats folded.
Video: Watch CarBuyer's video review of the Citigo
[[{"type":"media","view_mode":"content_narrow","fid":"69346","attributes":{"alt":"","class":"media-image"}}]]
The newcomer won’t cost much more than the three-door – you’ll pay around £350 extra, which is pretty much what VW charges. This means the five-door Citigo should start around £500 less than its sister car, at only £7,850. That’s amazing value, given that a five-door Toyota Aygo costs nearly £9,000.

Inside, the rear seats are very slightly raised and there’s a lot of room – with a 2.4m wheelbase, you really can fit a six-footer behind a similar sized occupant up front. It’s easy to get in and out of the back, while there’s even room for your feet under the chairs in front.

While there isn’t enough door space for the rear windows to wind down into, you can at least unclip them and pop them out. There are numerous storage pockets, cup-holders in the centre console and two colour-coded cargo nets in the boot.

The cabin surfaces and finish are of good quality (although the colour options are more sobre than in the up!), while top-spec Elegance trim brings a removable iPad-style touchscreen sat-nav. You can also specify City Safety Drive, which uses a laser to scan the road ahead at low speeds and can automatically brake the car if it senses a collision is imminent.
While the Citigo’s exterior doesn’t get the same distinctive C-pillars or black glass tailgate as the up!, it’s smart and sharp. The front features Skoda’s revised logo: a crisp, modern arrow.
The 1.0-litre car is quiet at idle, the clutch is light and the gearshift, while notchy, is lightweight, too. Put your foot down and the three-cylinder makes a great noise, sounding a bit like a Porsche 911. The 999cc petrol engine can be specified with 58bhp or 74bhp. A GreenTec version is available, too, which boasts CO2 emissions of less than 100g/km thanks to stop-start and low-rolling tyres.
We tried the 74bhp model and it didn’t sound strained at any point, even when working hard near its 6,100rpm redline. It also felt faster than its 0-62mph time of 12.7 seconds suggests. Factor in 60mpg economy and 108g/km of CO2, and there’s a lot to like.
There’s some body roll around corners, but the pay-off is a comfortable ride. Refinement is good, too – most of the noise comes from the engine, but as it makes such a great sound that’s not too much of hardship. The car is also pretty quiet on the motorway.
So, should you buy the Citigo over the VW up!? It’s not quite as distinctive as its cousin, but it’s even better value. It simply comes down to which badge you prefer and whether you’re prepared to pay slightly more for the VW.