Skoda's hottest ever hatch now comes with a twin-charged petrol engine, but has some of the personality of the old Fabia been lost? 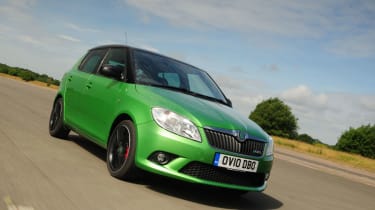 The vRS no longer has its unique selling point of diesel power, and with handling that’s engaging rather than thrilling, it’s no match for hardcore opponents such as the Renaultsport Clio. But the 1.4-litre twin-charged engine delivers punchy performance and the seven-speed DSG transmission brings paddleshift performance at a competitive price. Add five-door practicality and subtle styling, and the Fabia is a great hot hatch.

It’s the hottest hatch Skoda has ever made, and it’s hit the UK!

We gave an early verdict on the new Fabia vRS when we drove a European-spec model – and as we reported then, it’s all change under the bonnet.

The 1.9-litre TDI diesel, which was so popular in the previous car, has made way for the VW Group’s supercharged and turbocharged 178bhp 1.4-litre TSI petrol unit.

This also powers the SEAT Ibiza Cupra and VW’s new Polo GTI and, like these models, the Skoda comes exclusively with a seven-speed DSG twin-clutch gearbox. Setting it apart on the outside is a small rear spoiler, tinted glass and 17-inch wheels. But with its tall stance, the vRS doesn’t look fully at home as a hot hatch.

Inside, it’s simply laid out and feels well built, if slightly uninspiring. The standard sports seats blend support and comfort, while the three-spoke leather steering wheel and metal-effect pedals add a sporty feel.

On the road, the twin-charged engine revs freely and delivers strong performance. The steering wheel paddles and smooth shift action of the DSG make the car engaging to drive, although the box can kick down too readily.

The steering is accurate if a little numb, while the traction control works hard to curb wheel spin. Despite sports suspension, there’s still some body roll, but the ride is good for a hot hatch.