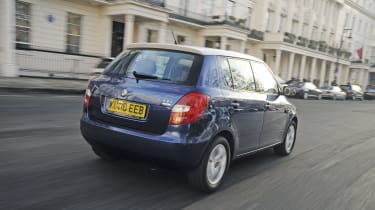 The Fabia is well built and offers plenty of practicality. But it can’t match the Fiesta dynamically and it’s not as well equipped or competitively priced as the i20. Too much body roll and an inefficient engine take the edge of the driving experience, too.

Skoda has come a long way since the original Fabia was launched eight years ago. To date, more than 1.5 million have been sold worldwide, and the Czech hatch has earned a reputation for providing quality, interior space and value for money in one package.

The larger second-generation Fabia picks up where the original left off. Despite being taller and longer than its rivals here, it has the shortest wheelbase. That means the overhangs are long, and combine with a high waistline to make the Fabia look a bit dumpy in this company.

But there’s plenty of decent detailing – the black A and B pillars take their inspiration from the MINI, while the large radiator grille and headlights give the Fabia a similar face to the Roomster supermini-MPV.

The lofty body height means interior space is a real strong point. Legroom is excellent, while the 300-litre boot is class leading. Fold the rear seats down and space increases to 1,163 litres. Up front, the seats are mounted high, and there’s a decent range of adjustment for the driver.

The audio and heater controls are well positioned, while Fabia 2 models have a two-tone finish to the dashboard. Overall, the cabin design is a little uninspiring, but the quality of materials and the robustness of the fit and finish are a step ahead of the Hyundai.

The driving experience can’t match the Fiesta’s, though – the Fabia’s controls aren’t as responsive and the steering isn’t as direct. When cornering, the Skoda has more body roll than the Hyundai, and is some way from offering the same engagement you get in the Fiesta. The handling is best described as safe – there’s lots of grip, but the car leans more than its rivals in corners.

This suspension set-up means the nose tends to pitch under braking, too. Surprisingly, despite the fact it’s not as sporty as the Fiesta, the Fabia’s ride isn’t as comfortable as the Ford’s. It doesn’t crash over rough surfaces, but the lack of body control means it can get bouncy over undulations. However, overall the Skoda does a better job of isolating occupants from rough surfaces than the i20.

Strangely, this impression isn’t backed up by our sound meter: the Fabia recorded louder noise figures than the Hyundai. The Skoda’s 1.4-litre engine has 85bhp, but the 112Nm torque output is 7Nm down on that of the smaller-capacity Hyundai. As a result, while its 11.6-second 0-60mph time is one second up on the i20, in-gear responses are similar. With the highest emissions, the Skoda engine is a disappointment, especially as it’s not as smooth as the Ford’s unit.

The Fabia still has much to offer, as it’s roomy and well built, but it’s more expensive than the Hyundai and not as well equipped. Could Skoda’s domination of the value supermini class be under threat?

Price: £10,470Model tested: Skoda Fabia 2 1.4Chart position: 3WHY: Fabia is roomy, cute and well built, while Skoda has a reputation for quality and value.