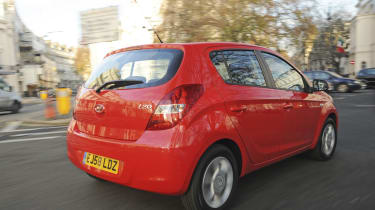 As with the i10 and i30, the i20 shows how far Hyundai’s models have improved. It’s not as exciting to drive as some rivals, but its mix of value for money, decent quality and generous standard kit, as well as low emissions and frugal economy, will appeal to many.

In any business it pays to know your customer, which is why Hyundai is now developing cars specifically for the European market. It realises that buyers here expect different things to those in Asia or the US. As a result, the new ‘i’ models get significant design input from Hyundai’s European development centre in Germany.

So it’s no surprise that the i20 looks like a Continental supermini. There’s more than a hint of Vauxhall Corsa and Renault Clio to its dimensions, angles and detailing. It’s lower, longer and wider than the Getz it replaces, plus the wheelbase is longer, all with the aim of improving ride quality and cabin space.

Video: watch CarBuyer's video review of the Hyundai i20

In fact, no rival in this test can match the 2,525mm between the i20’s axles. As a result, rear legroom is up with the class leaders, and passenger comfort is helped by the fact it has a smaller transmission tunnel than its rivals. The rear seats fold in a 60:40 split, and with the bench in place, the 295-litre boot is the same size as the Fiesta’s. The i20 scores well for kit, too. Unlike its competitors, you get electric windows front and rear, plus curtain airbags as standard.

As with the exterior, Hyundai has made sure that the dashboard design is tailored to what supermini owners expect. The layout is straightforward, and build quality is an improvement over the Getz. But while the i20 is undeniably well put together, some of the plastics still look and feel low-rent compared to the materials in the Fiesta and Fabia.

The plain plastic gearlever is particularly poor – a shame because it detracts from the great driving position. The multifunction steering wheel adjusts for reach and rake, plus the driver’s seat moves for height, while light controls make the i20 a breeze to drive. However, the five-speed gearbox lacks the mechanical robustness of the Fiesta’s transmission, and the clutch isn’t as satisfying to use, either. The same criticism can be levelled at the steering – there’s an artificial feel either side of the straight-ahead, which adds a vagueness to the i20’s responses.

Hyundai’s chassis engineers have done a fine job, though. The i20 turns into corners positively with ample grip. It also rolls less than the Fabia and feels very comfortable at motorway speeds. It can’t match the Fiesta’s fun factor or refinement, but it gets closer than any of the firm’s previous superminis.

What’s more, the 1.2-litre engine delivers very similar performance to the Fiesta. The Hyundai unit has to be worked hard, but while it’s a little coarse at low revs, it’s relatively refined higher in the range. It also has the lowest official CO2 output in this group. Add this to the generous equipment, bargain list price and fantastic five-year warranty, and the new i20 is sure to worry established big-sellers.

As with the i10 and i30, the i20 shows how far Hyundai’s models have improved. It’s not as exciting to drive as some rivals, but its mix of value for money, decent quality and generous standard kit, as well as low emissions and frugal economy, will appeal to many.

Price: £9,445Model tested: Hyundai i20 1.2 ComfortChart position: 2WHY: The i20 promises to be a big step forward for Hyundai in the supermini sector.