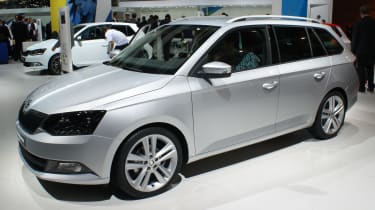 Skoda has revealed the all-new Fabia Combi, an estate version of the Czech firm’s new supermini, boasting a huge 530-litre boot. That’s as big as the one on offer in the Toyota Auris Touring Sports – a car from the class above.

Aside from this small car’s surprising practicality, there aren’t too many surprises when it comes to the design. The front-three-quarter view is pure Fabia hatch, featuring the crisp lines and angular lights that Skoda hopes will give its car a timeless appeal. Only the extended roofline and long rear overhangs differentiate.

As well as its outright spaciousness, Skoda has concentrated on making the boot as usable as possible, too. The floor is wider, the seats fold flat and the loading sill is just 611mm off the ground, so you don’t have to lift heavy items too far. A movable boot floor is available, too, so you can create a completely flat load bay. 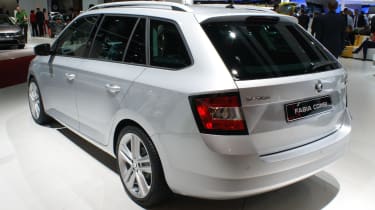 There’s a more spacious cabin for passengers, too, both in terms of legroom and shoulder room. Plus, despite an overall design that is actually lower than the outgoing car, there’s more headroom for the driver and front passenger.

The engine range is borrowed from the hatchback, so includes a 1.0-litre three-cylinder with 74bhp and a 1.2 TSI producing 109bhp. The diesel line-up consists solely of 1.4 TDI three-cylinder units, offering between 74bhp and 104bhp. Buyers can choose between manual or DSG for most engine options.

Skoda hasn’t revealed too many official figures just yet but has said that the new, lighter kerbweight – as low as 1,004kg – and a more aerodynamic design will allow for an 82g/km GreenLine version, arriving after sales of the standard Combi start in early 2015.

There are plenty of hi-tech features available on the new Fabia, too, including keyless entry and an infotainment system that is allows you to mirror your smartphone’s screen and control its functions through the in-car system.

We haven’t got official prices just yet but considering the Fabia hatch starts from £10,600 – and the Combi isn’t available with that car’s entry-level 59bhp engine – it should kick off from around £12,000.

Welcome to our Paris Motor Show hub page. Scroll down for all our Paris content...
Skoda Fabia Estate review 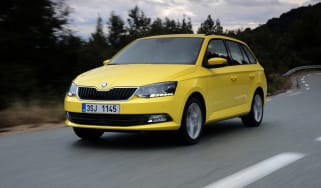