We drive the Skoda Karoq on UK roads for the first time in 1.6-litre diesel form

Skoda’s new Karoq is a seriously accomplished all-rounder deserving of a place at the top of your mid-size SUV shortlist. While it may have lost a touch of the old Yeti’s personality, it has replaced that with a more upmarket interior, increased practicality and excellent road manners. It remains strong value, and while this diesel isn’t our top pick, it’s far from a poor choice. In 1.0-litre turbo guise, the Czech SUV could earn a full five-star rating.

The family SUV market is more crowded than ever, and few car makers want to take risks in such an important sector. The distinctive looks of Skoda’s old Yeti divided opinion, so the brand says, and that ultimately harmed sales. As such, the Czech firm has taken a more pragmatic approach with the new Karoq.

Skoda doesn’t want you to think of the Karoq as a direct replacement for the Yeti, mainly because the new car is a full 16cm longer – now positioned as a fully-fledged rival to the Nissan Qashqai.

That’s clear from the outside, where no design influence from the Yeti is carried over. Instead, the Karoq looks much like a shrunken Kodiaq, and in profile it’s strikingly similar to its SEAT Ateca cousin. It’s clean, smart and well proportioned, then, but it lacks a little of the Yeti’s boxy character. 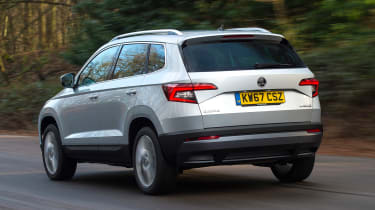 The interior is in a different league to its predecessor, however. The dash is lifted almost unchanged from the Kodiaq, meaning the design is clean and attractive. The technology is intuitive to use, as well, and the fit and finish is the equal to that on pricier Volkswagens. There’s more soft-touch finishes than you’ll find in the Ateca, and our SE L model’s plush Alcantara-trimmed seats add to the general premium feel.

Practicality has been a Skoda forte for years, and the Karoq largely lives up to expectations. There’s loads of space in the front, and headroom is fine even for tall adults in the back. Legroom isn’t quite as generous as you might expect from the brand, though – four six-foot passengers can sit in acceptable comfort, albeit with knees brushing the Karoq’s plastic tray tables.

Still, sliding and individually folding rear seats allow the already competitive boot to be easily expanded, and the multitude of neat ‘Simply Clever’ touches show thought has gone into the design.

The Karoq recently saw off the Peugeot 3008 with the 1.5 litre petrol engine, but our first go in a UK-spec model comes is with the VW Group’s venerable 1.6-litre TDI diesel. It might not be the volume seller any more (you can blame the widespread demonisation of diesel for that), but it’s still a good all-rounder, offering enough performance for most family’s needs. Refinement is good, and real-world efficiency is impressive. Still, we still reckon the excellent 1.0-litre TSI is the best fit for the Karoq. 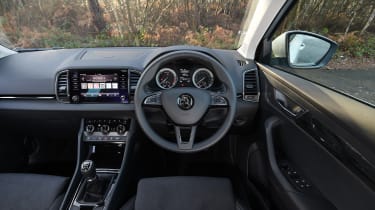 Once up to speed, Skoda’s newest SUV is an extremely composed and grown-up car to drive. It’s got a slightly softer suspension set-up than the SEAT Ateca, so it offers a more comfortable ride that takes the edge off big potholes. It retains most of its Spanish sibling’s tight, controlled feel in the bends, however.

The steering isn’t as responsive to inputs as it is in a 3008, though it’s more naturally weighted. Body roll is kept in check nicely, and good forward visibility means it’s very easy to place on the road.  With good wind and road noise isolation, the Karoq is certainly a more grown-up feeling car than the Yeti on the road, too.

As with the Kodiaq, the Karoq is very competitively priced – so long as you avoid the most lavish trim levels. Our SE L spec car comes with 18-inch alloys, adaptive full-LED headlights, heated seats and an eight-inch touchscreen sat-nav with integrated WiFi. Even so – it’s still £1,200 cheaper than a similarly powered Peugeot 3008 in Allure trim. Reasonably priced options help you spec a Karoq sensibly, while initial finance deals also look extremely tempting.