The Peugeot 3008 has ruled the compact SUV class in 2017. But can the new Skoda Karoq topple it? 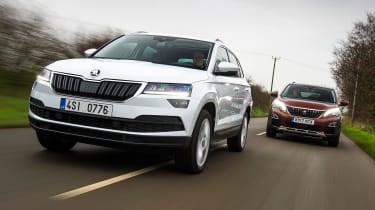 Buoyed by the success of its Kodiaq large SUV – an Auto Express 2017 New Car Awards winner, no less – Skoda is bidding to keep up the momentum with this, the new Karoq mid-sized SUV. It’s a replacement for the ever-popular Yeti, and is aimed at capturing the imaginations of buyers in one of the most popular and lucrative sectors of the market. We are testing it for the first time in the UK here, and to succeed it will have to deliver so much in so many areas.

Buyers expect space, pace, wallet-friendly running costs, practicality to accommodate the rigours of family life, affordability, efficiency – the list goes on. So far in 2017 there have been a few challengers to our class champion, the Peugeot 3008, but none has beaten it.

Arguably, the Skoda Karoq poses the greatest threat yet to the Peugeot. However, if the newcomer is to rise to the very top of the class, especially in this ever-more popular form that features a small turbocharged petrol engine up front, it will have to combine all of the qualities we’ve already mentioned with one the 3008 excels at: sheer value for money. 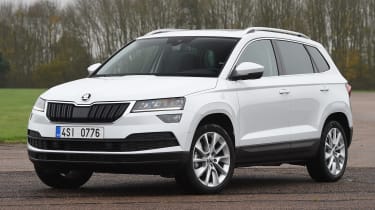 Skoda is hoping the new Karoq will carry on the good work the brand has started with its Kodiaq large SUV. The smaller car’s price starts from £25,815 for the 1.5-litre TSI combined with Skoda’s DSG auto box in SE L trim – which puts it extremely close to the Peugeot it faces here. So can the Karoq take the 3008’s crown?

The  Skoda’s more powerful engine and sharper-shifting DSG gearbox meant it was eight tenths faster than the 3008 from 0-60mph, taking 8.8 seconds.

The box is smooth when cruising and changes quickly in manual mode, and thanks to the Karoq’s extra torque (250Nm compared with the 3008’s 230Nm), it’s also flexible, so the transmission doesn’t hunt for lower gears when you ask for a burst of acceleration. At our test track, the seven-speed Karoq accelerated from 50 to 70mph in sixth quicker than the 3008, taking 10.9 seconds, while its shorter gearing meant it was punchier in the lower ratios. 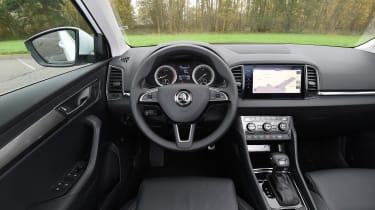 On the move, the Skoda feels sharper than the Peugeot. The steering is nicely weighted and more responsive – and it’s more agile, with less roll when changing direction. This stems from the Karoq’s firmer suspension, but the downside is that you’ll feel more body and wheel movements than in the 3008, which smooths out poor surfaces nicely.

The faster you go, the more the Karoq’s body control comes to the fore, though, giving plenty of security and confidence. The more energy you put through the springs and dampers, the more the ride quality calms down, but because these SUVs are likely to spend lots of time in town, the lumpier feeling from the Skoda’s suspension over broken surfaces just takes the edge off the car’s otherwise impressive refinement. However, it’s only marginally less supple than the Peugeot. 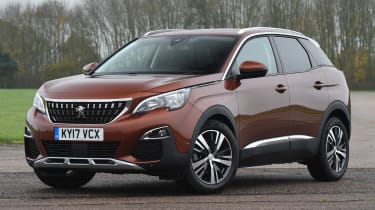 The 3008 is very much the car the Karoq has to beat. It’s our reigning mid-size SUV champion thanks to a wide range of attributes, but the Skoda has the potential to steal the Peugeot’s crown. Here we test the 3008 in Allure trim (although our pictures show a GT Line model) with the brand’s 1.2 PureTech 130 engine, linked to a six-speed automatic box. Prices start from £25,965 in this specification.

• Most reliable SUVs and 4x4s

You immediately feel that the 3008 is softer and more forgiving than the firmer Karoq. Over lumpy ground the chassis soaks up bumps that you tend to feel a little more in the Skoda, even though that car’s damping is still nicely refined and well controlled.

The long-travel suspension in the Peugeot means it feels composed on all but the worst roads, offering strong refinement and comfort. On the motorway this is particularly evident, because the 3008 is hushed and cruises smoothly thanks to the quiet 1.2 turbo petrol engine and six-speed automatic box. 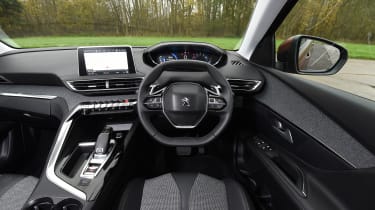 This doesn’t shift quite as quickly as the Skoda’s dual-clutch auto, and the Peugeot has less power and torque at 129bhp and 230Nm respectively. This is why the 3008 trailed the Karoq from 0-60mph by eight tenths of a second. Despite its 123kg lower kerbweight, the Peugeot also lost out to the Karoq during our in-gear performance tests. The 3008 accelerated between 50 and 70mph in fifth and sixth in 10.4 and 14.8 seconds respectively, which was a sizeable 2.2 and 3.9 seconds behind the Skoda.

Push the Peugeot through a series of corners and its softer focus is evident. There’s more roll, and big steering wheel movements upset the car. The small steering wheel means it feels alert and there’s a useful level of agility on offer, but the steering is fast, so if you’re a little too abrupt it will overload the suspension. Keep the pace slower and the 3008’s comfort is what shines through strongest.

Testers’ notes: “It’s unlikely these cars will go off-road often, but while the two-wheel-drive 3008 gets the option of a £470 Grip Control system, a 4x4 version of the Karoq 2.0 TDI is available.”

With more performance than the Peugeot and little to split them on running costs, the Karoq offers as much practicality as the 3008, but more flexibility. Combined with its superior infotainment, acceptable comfort and lower price as a cash buy and on PCP finance, the sharper Skoda offers enough comfort and just edges the Peugeot in petrol auto form tested here. 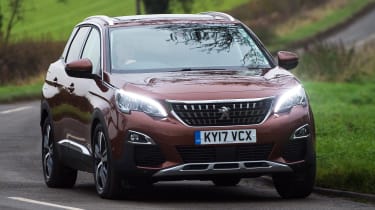 The 3008 is still a great SUV and proves the leap Peugeot has made. It’s on par with the Karoq for practicality, but offers a little more comfort and similar refinement. While it’s a little more supple, it’s neither as fast nor as good to drive. With very little to separate them when it comes to running costs, the 3008’s pricier PCP deals count against it. 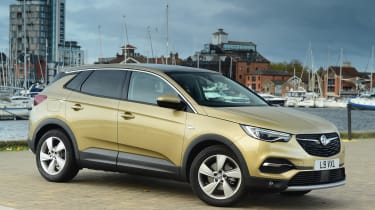 The Grandland shares its mechanical make-up with the 3008. It’s not as extrovert, but there’s plenty of tech thanks to its OnStar system. A 514-litre boot means practicality is competitive when compared with the Karoq’s as well. 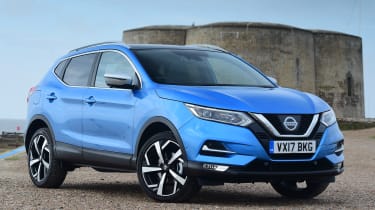 Not only does the Qashqai have a price advantage, it also offers lots of kit in N-Connecta trim. But a 430-litre boot and sub-standard infotainment mean it lags way behind the best cars in the class in many of the areas buyers here prioritise.