We get behind the wheel of the striking Skoda Vision iV concept, which previews the Czech brand’s forthcoming new pure-electric SUV

If the finished car can retain enough of the Skoda Vision iV concept’s striking looks, it’ll be a watershed moment for the brand and for buyers after an EV with this blend of affordability and desirability.

Skoda’s pure-electric future has been overshadowed by the fanfare around VW’s imminent ID. range of EVs. But, as we potter tentatively around a sunny Czech car park in the striking Vision iV concept, it seems like the understated, ‘sensible’ brand is inching closer to its German counterpart when it come to appeal.

It doesn’t feel like it’s just about the 301bhp electric powertrain in this car, although the twin motors – one on each axle, delivering four-wheel drive and a range of 310 miles courtesy of the 83kWh battery pack – are, of course, critical to the message of the concept. But it also feels like a significant moment for Skoda’s design.

After all, the vehicle that is whirring around the compound – albeit blighted by brittle suspension that’s typical of a concept car – is rather special to look at, and sit in. Aspirational, you could say. And that’s despite it being “85 per cent representative of the production car,” according to its exterior designer, Omer Halilhodzic. 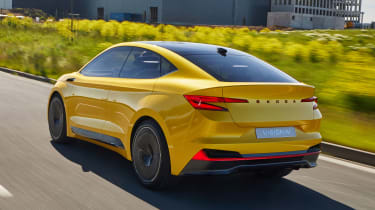 The electric SUV, which is roughly the same length as the Kodiaq, will be offered both as coupé-SUV, like we’re driving here, and a more functional, boxier SUV.

Halilhodzic is at pains to point out that, the roofline on the coupé version “could actually be lower on the road car than the Vision iV concept, but it will still be roomy. That is essential for a Skoda; we will always build affordable, sensible cars.”

The crystal gear stalk, large, high-set touchscreen and boutique-looking blend of Alcantara, metal and wood-effect finishes around the cabin are more concept-car fantasy, however. This is one area that will change significantly for production, as Halilhodzic states, “We are making efforts to use recyclable materials, but we must always stick to Skoda heritage and we are an attainable car for the people.”

The squared-off steering wheel is also more designer’s fantasy than production reality and houses a brushed metal switch that simply says ‘Autonomous’. Here is a nod to the Vision iV’s Level 3 autonomy – a suite of advanced driver aids that will let the car steer itself in certain conditions. When legislation finally allows, at least.