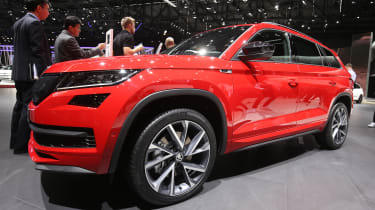 Skoda has announced UK prices for the sporty looking Kodiaq SportLine, which is on sale now from £32,685.

The eyecatcing addition to the Kodiaq line-up was unveiled by the Czech marque back in March at the Geneva Motor Show. It features a range of sporty styling tweaks inside and out to make it stand out against standard versions of the big seven seater.

SportLine sits between SE L and Edition trim levels in the Kodiaq SUV range. The base price of £32,685 gets you the 1.4-litre TSI petrol engine producing 148bhp and is mated with a six-speed manual gearbox. A seven-speed DSG gearbox can be equipped for an extra £1,300, totalling £33,985.

The Sportline model adds some racy touches to the exterior, with the radiator grille, roof rails, wing mirrors and side window trims all finished in black, while the rear windows are tinted. The bottom lips of the front and rear bumpers are colour coded, as are the side skirts, while it rides on 20-inch alloy wheels. 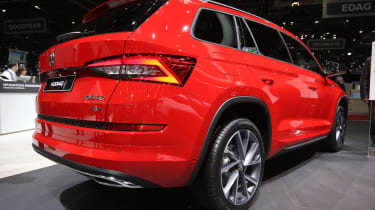 Alcantara-trimmed sports seats are fitted as standard, paired with a leather steering wheel and aluminium pedals. The sporty feel of the cockpit is matched by the visual readouts on the driver’s display, which includes a G-force meter.

As standard, the Sportline comes with Driving Select Mode, adjustable LED ambient lighting, Alcantara trim inserts, a touchscreen infotainment system plus a suite of driver assists. Trailer Assist and Blind Spot Detect are included, as well as autonomous emergency braking and the revised Park Assist with surround view cameras. Adaptive Dynamic Chassis Control is on the options list, which includes a Sport setup for the dampers. Sportline models take after SE L Kodiaqs, so in the cabin a 9.2-inch Columbus touchscreen infotainment system with sat nav and Wi-Fi is included. 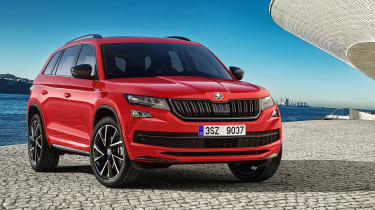 Although the Sportline looks sporty, this isn’t the full-blown Kodiaq vRS that Skoda could be planning. In terms of powertrains it shares its choice of four engines with the Kodiaq Scout – a 148bhp 1.4 TSI petrol lines up alongside a larger 178bhp 2.0 TSI, while the two diesels are both 2.0 TDI powerplants, with either 148bhp or 187bhp. Four-wheel-drive is fitted as standard. Order books are open now with first deliveries expected in February 2018.

Does the Skoda Kodiaq Sportline look the part? Let us know in the comments.

Welcome to our Geneva Motor Show hub page, scroll down for all our Geneva content...
Best SUVs to buy 2020