First report: Rugged new Octavia is living up to its promise – but does it get 10 out of 10? 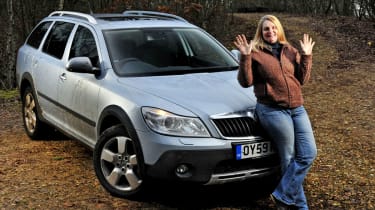 I've been working flat-out recently, but our new Skoda has ensured I haven’t got my hands dirty! That’s because the Octavia Scout 2.0 TDI 4x4 Estate is a proper workhorse – and it does all the hard yards for you. Mind you, it’s also one of those vehicles that everyone wants to borrow, so keeping my hands on the car is proving to be a tough job in itself!

Now, I usually like models which are impractical and fun rather than sensible, so I was unsure about running a family car. But with its beefed-up bodywork and raised suspension, the rough-and-ready Scout won me over from the off.

Its four-wheel-drive capability has also been a real bonus during the recent cold snap – the atrocious weather served as the perfect showcase for our latest arrival. And although the ride is on the firm side, it’s certainly not uncomfortable. Even our snappers – generally a picky bunch – were impressed after using the car to carry out some tracking photography at our local test track while shooting our recent Greatest Hot Hatches special (Issue 1,098).

The load area is huge and it swallowed a multitude of stuff for the test. This incorporated car cleaning equipment and four sets of axle stands. Plus, it held all the food and drink – including enough bakewell tarts to sink a battleship – to keep the staff and the owners of the 20 models happy for the duration of the two-day job.

It hasn’t all been plain sailing, though. For a start, the Octavia doesn’t like pulling away on steep gradients. It has hill-hold control, designed to make the process easier, but the set-up applies the brakes for too long and you end up fighting against the system when moving away – which increases the chance of stalling!

Also, the 2.0 TDI is unrefined at idle, and the sunroof is tiny. The latter is a £400 option, and that looks expensive compared to the huge panoramic designs which are now commonplace.

These are all minor gripes – but there is one serious flaw. “Be Prepared” is the motto of the Scout movement, yet this Skoda doesn’t follow it... The car doesn’t come with a jack – as I found to my cost on a cold and snowy winter day, when I suffered a puncture.

To my dismay, there was only a tyre repair kit in the boot. No major problem there – except that the instructions tell you to remove the wheel before inflating the rubber. Easier said than done when there isn’t a jack on hand: this essential kit is actually a £25 option! Come on, Skoda – would it really be too much to ask to fit one as standard?

After I’d waited three hours for the RAC, the hole was plugged and I was back on my way. A puncture could have been cheaply repaired; instead, I had to fork out £266 for an all-new tyre – just what you need a week before Christmas. Owners be warned: invest in a jack now, before you have a similarly miserable experience!

Despite this fraught start, I still enjoy getting behind the wheel, especially on the long trip to Dennis Publishing’s satellite office in Wollaston, Northants. The reassuring clunk of the door shutting behind me and the cosseting seats remind me just how much I like this sensible car.

Is the Octavia Scout the ultimate family car? My wife reckons so. She loves its space, tall driving position and confidence-boosting 4WD. The huge boot is another bonus. You don’t need to pack carefully – just put in your luggage and slam the tailgate. Even with two kids, we haven’t managed to fill it. Snapper Dominic Fraser is another fan: here he is (below) using the load area as a camera platform for some car-to-car photography for our Greatest Hot Hatches special (Issue 1,098).