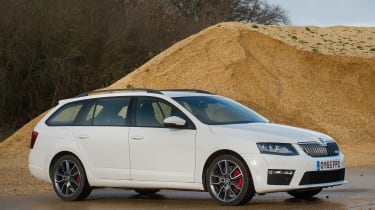 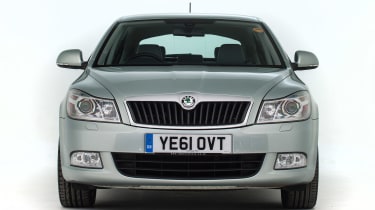 A facelift in January 2009 brought an overhauled cabin, new lights and a 1.4 TSI engine (replacing the 1.6 and 2.0 FSI); the Scout and vRS were refreshed four months later. The eco-friendly GreenLine 1.6 TDI made its debut in June 2009; from January 2010 there was an Octavia 1.2 TSI. Two run-out specials, the SE Connect and vRS Blackline, appeared in September 2012, before an all-new Octavia landed in March 2013. 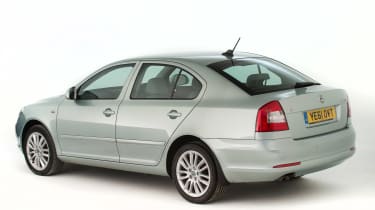 The common-rail (CR) diesels are smooth and quiet but won’t take neglect; the 1.9 TDI’s power delivery is more peaky, plus it’s a tough engine. The DSG auto box is superb, although it tends to be less reliable than the manual alternative. Entry-level cars (Classic, S) are basic, so buy a model with Ambiente trim (SE from 2009) at the very least to get climate control, alloy wheels, remote central locking and electric windows. The Elegance is even better; it comes with rear parking sensors, cruise control, automatic wipers plus an auto-dimming rear-view mirror.

Alternatives to the Skoda Octavia Mk2

Sales in this class are falling, but for now, the Octavia has lots of rivals on the used market. In most plentiful supply are fleet favourites the Ford Mondeo and Vauxhall Insignia, which are easy to recommend.

The Citroen C5 can be a bargain, but can’t match the Skoda for reliability; the same goes for the Peugeot 407, although the 508 that replaced it is much better.

The Mazda 6 is stylish, great to drive and reasonably reliable – plus it’s good value for money. Honda Accord is an unusual option, yet it’s dependable, safe, well equipped and looks smart; prices are on par with the Skoda, but the range isn’t nearly as wide.

The DAB radio can suffer from drop-out spots and loses signal. It seems to be more of an issue on the estate because of the aerial arrangement. 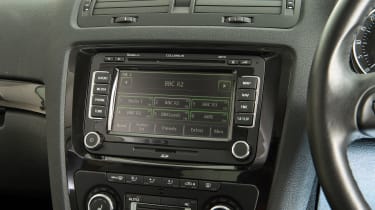 If there’s a burning smell and the engine seems very hot when you switch off, it’s because the diesel particulate filter is being regenerated.

Water can build up inside the front doors if the car is left to stand, and it can potentially get into the footwells as it’s channelled in via the seals.

The standard headlights aren’t very popular with some owners, who have fitted aftermarket H7 or H15 bulbs, usually rated at 4000-5000k.

With comfortable seats and a clear dash, the Octavia is easy to live with, but some of the materials used aren’t of an especially high quality. Head and legroom are very good, and so is the boot space. There’s 560 litres available with the seats up, or 1,350 litres with them down – but they don’t fold flat. 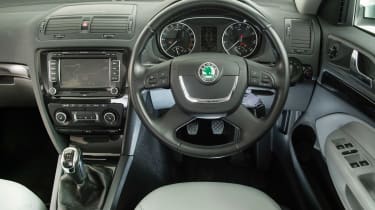 All Octavias are offered with fixed or variable servicing. The latter requires maintenance up to every two years or 18,600 miles; the fixed schedule means a check-up every 10,000 miles or 12 months. Services alternate between minor and major, priced at £149 and £269 respectively.

The second-generation Octavia has been recalled four times. First up, in February 2005, cars built from March to August 2004 with the TDI PD engine were called back over fuel leaks. The same fault led to another recall in late 2011, concerning 2.0 TDI Octavias produced from 2009.

A campaign in April 2006 affected 2.0 TDI manual cars built between February 2004 and June 2005, due to a risk of flywheel failure. Finally, in December 2009, DSG models were recalled as they could suffer from a loss of drive. 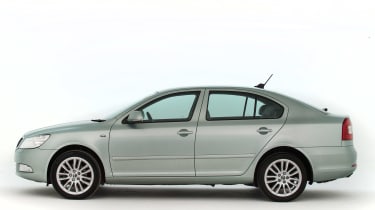 A ranking of 70th in our Driver Power 2016 satisfaction survey is impressive for a 12-year-old car; when it was new, the Octavia was rarely out of the top five. Fourth for practicality is excellent, while 40th for running costs and 54th for build quality are good. But reliability (134th) and ride quality (120th) disappoint.

Most used buyers don’t care about pin-sharp handling or futuristic styling. Instead, their priorities are reliability, practicality and low running costs. It’s these that the Octavia delivers so effortlessly, so it’s no wonder it’s always done so well in our annual Driver Power satisfaction survey. The Skoda can still deliver where it matters most, on practicality, value and low running costs. Popular with the police and taxi drivers alike, it’s not surprising the Octavia was crowned Best Used Estate in our recent Used Car Awards – plus the hatchback is every bit as talented.