The Skoda Superb has been given a mid-life update. We drive it ahead of its UK arrival in July 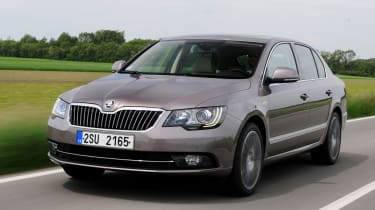 The Superb is better than ever. Company users will welcome the improved economy and emissions, while private buyers will appreciate the sharpened styling and premium equipment. Even so, the old 2.0-litre TDI is starting to feel its age, and this flagship version is expensive. The GreenLine III estate could well be a better proposition.

The Skoda Superb has enjoyed award-winning success since its launch in 2008, and the estate model in particular has always been a firm Auto Express favourite. However, in recent months, the Superb has lagged behind its mainstream rivals in terms of efficiency, so this thorough mid-life facelift has arrived just in the nick of time.

At launch there will be six engines to choose from, ranging from an efficient new GreenLine III 1.6 TDI, with CO2 emissions of only 109g/km (down from 119g/km), to the potent 3.6-litre V6 petrol with four-wheel drive and a 155mph top speed.

We got behind the wheel of the mid-range 2.0 TDI 4x4, which delivers 138bhp and 320Nm of torque, but now comes with stop-start and energy recovering brakes as standard. Economy now matches or betters rivals such as the Volkswagen Passat and Ford Mondeo.

The engine isn’t quite as impressive as the latest 2.0 TDI in the Octavia, but there’s still more than enough performance for most drivers, and the six-speed manual box and well weighted steering mean it feels as composed and comfortable as cars costing twice as much.

Refinement is excellent at low speeds, but the engine emits a noisy rumble under acceleration. The four-wheel-drive set-up means the Superb should be ideally suited to British winters.

There’s an updated look, too. Although the basic profile is much the same, there’s a host of new details to bring it up to date. From the A-pillars forward, the biggest changes include the latest family grille and a new badge, which now sits separately on the bonnet.

A more angular set of headlights is framed with a pair of C-shaped LED strips, and the Superb now sports smart new 18-inch alloy wheels. At the back, more LEDs add a touch of class, and some subtle lines in the bootlid mirror the looks of the new Octavia hatch.

Inside, the updates are less obvious, but extra equipment for entry S models – including cruise control and a trip computer – keeps things fresh. So do the new steering wheel designs. Skoda claims that the value of kit on facelifted cars has gone up by £1,150, but the overall price has only risen by between £400 and £800.

Although the suspension is soft enough to offer a cosseting ride in town, body control is good when cornering. In addition, the optional Haldex 4x4 system means that there’s plenty of grip in all conditions. The Superb isn’t quite as sharp as the Mazda 6, but it’s more rounded, covering ground with ease.

The top-spec Laurin & Klement edition we tried comes with enough luxury extras to turn premium car drivers green with envy – and everything from the plush heated rear seats to the dark privacy glass make it the perfect limousine.

A long wheelbase means there’s lots of legroom – but very tall passengers may find their hair brushing the roofline.

The Superb is still as practical as ever, and the patented TwinDoor boot is now easier to use, with two separate buttons – one opening the saloon boot, the other lifting the entire hatch to reveal a luggage area that can be extended to 1,700 litres.