The rugged Subaru Outback estate won't appeal to everyone, but it's still worth a look for some 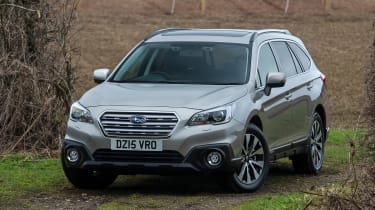 The Subaru Outback is now in its fifth generation, and while it won’t appeal to everyone, it’s a big improvement over the old model. Yes, crossover rivals are more stylish, but if you want a practical estate car with impressive off-road ability, then this latest version is well worth a look.

Subaru claims to have pioneered the ‘crossover’ segment with the launch of the original Outback more than two decades ago. Since then, however, a raft of rivals have stormed the market, offering genuine off-road ability, with luxurious interiors and car-like handling.

Now in its fifth generation, Subaru has stuck to a tried and tested formula for the latest Outback, offering a jacked-up version of the Legacy estate with four-wheel drive and a host of new safety features. While the Legacy is no longer available in the UK, the Outback will go on sale here in April. 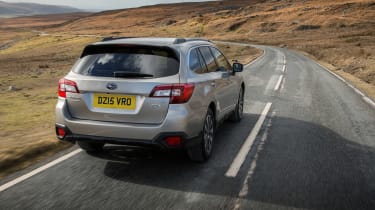 Although buyers will get a choice of 2.5-litre petrol or 2.0-litre diesel engines, it’s the latter that is expected to account for the majority of sales. We tried the Lineartronic automatic, which returns 46.3mpg and emits 145g/km of CO2.

While the 148bhp 2.0-litre diesel will never pin you back in your seat, we found the power delivery smooth and progressive. The CVT auto has an innovative step function, which actually allows it to act like a conventional torque converter – with seven individual ratios – and is among the best of its type that we’ve tried.

Of course, the Outback is no sports car – but that really isn’t the point. The increased ride height means it rolls a bit in the bends, and the brakes are spongy at best, but the symmetrical four-wheel drive system and active torque vectoring ensures there’s plenty of grip, and the steering is accurate. What’s more, there’s only a handful of estate cars on the market with such an impressive ability to travel quite so far off the beaten track.

It’s a practical car on the inside, too. While more conventional SUV-shaped rivals sacrifice space for style, the Outback stays true to its roots with a decent 512-litre boot and acres of space up front. The rear seats are big enough for three adults, and they’ll fold completely flat to reveal a cavernous 2,000-litre load bay. 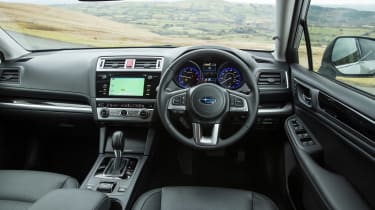 The interior is smart, and the infotainment system easy to use. The slick new touchscreen fits neatly in the dash, and actually looks much smarter than some of the iPad-style setups you’ll find on rival cars. All models get automatic LED headlamps, 17-inch alloy wheels and heated seats, with SE Premium versions adding a sunroof, leather and keyless entry.

Safety is another key point. The Outback has already been awarded a five-star Euro NCAP rating, and comes loaded to the brim with clever crash-prevention tech. The innovative ‘EyeSight’ system scans the road ahead using a pair of low-definition cameras to recognise potential hazards. Unlike rival systems it can differentiate between cars, pedestrians and other objects, and can even identify brake lights to prepare the car for an emergency stop. Subaru bosses say it can actively prevent an accident at speeds of up to 31mph.

The new Outback won’t appeal to everyone, and that’s exactly why Subaru now offers cars like the versatile Forester and compact XV. Models like the Audi A4 Allroad are more luxurious and better to drive, but cost more and offer less space. The Outback is only expected to sell in small numbers, but if you’re in market for a pumped-up estate car with decent off-road credentials, it’s certainly worth a look.