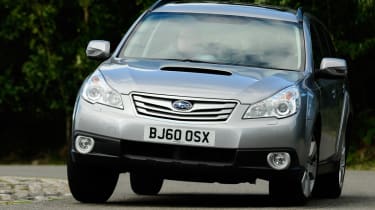 The Subaru Outback has been a firm fixture in the manufacturer's line-up since 1995 and is now in its fourth generation. It’s essentially a Legacy estate with a raised ride height. A practical, dependable and likeable family car, it’s a quirky alternative to the Audi A4 Allroad and Volvo XC70. All versions benefit from the famous Subaru symmetrical four-wheel-drive system and a range of characterful flat-four ‘boxer’ engines. Specifications are a little limited, as there’s only three trim levels to choose from and all are quite pricey. However, standard equipment levels are high.

There’s limited engine choice, with two petrol engines and one diesel available. Entry-level models get a smooth 167bhp 2.5-litre petrol with a Lineartronic CVT automatic gearbox, which is refined but works hard in this big car. The 256bhp 3.6-litre flat-six petrol is not short on performance, completing the 0-62mph sprint in 7.5 seconds, but its only available with a clunky five-speed automatic gearbox. Our pick of the range is the punchy 2.0-litre diesel, which comes mated to a six-speed manual gearbox and suits the go-anywhere attitude of the Outback. A 10-way adjustable electric driver’s seat is standard, so getting comfortable behind the wheel is incredibly easy. Plus, the combination of good visibility and a poised and grippy four-wheel-drive chassis makes the Outback surprisingly capable on the road. Raised ground clearance over the Legacy means the Subaru feels assured in mud and snow, too.

With residual values of around 40 per cent and so much standard kit, you won’t need to splash out on any expensive options with the Outback. Plus, every Subaru comes with a five-year, 100,000-mile warranty and three years’ free roadside assistance. But as with the Legacy, petrol-powered Outback models are not cheap to run. Unsurprisingly it’s the 3.6-litre petrol that features the most wallet wilting costs, courtesy of CO2 emissions of 232g/km and claimed fuel consumption of just 28.2mpg. The 2.5-litre is only slightly cleaner and more efficient, but has much less straightline pace. So that leaves the diesel to uphold the eco-friendly honours for the Outback. Its relatively impressive figures of 167g/km and 44.1mpg are a match for the Audi A4 Allroad 2.0 TDI. If you want to lower your running costs even further, it might be worth considering an lpg conversion for the Outback. Lpg costs around half the price of petrol or diesel, but it is worth remembering that the new tank would take up quite a lot of space in the boot and that not all petrol stations offer lpg. However, while opting for a conversion will invalidate the manufacturer’s own engine warranty, most companies also provide their own warranty schemes, while will cover the conversion for up to 10 years.

The Subaru Outback features a gaping grille, large headlamps and bulging wheelarches. Jacked-up suspension and tough-looking plastic mouldings hint at its off-road potential. Buyers can choose from S, SE and SE Nav Plus trims, although they all look identical externally. Climb inside and you’ll find a robust and workmanlike cabin. It’s solidly screwed together, but the materials don’t feel as upmarket as rivals, while the dashboard design is dated. Still, there’s plenty of equipment, with all versions getting climate control, Bluetooth connectivity and heated seats. Go for the SE and you’ll benefit from leather seat trim, while Nav Plus models include a clunky sat-nav set-up.

Given its dimensions and estate car roots, it would be a surprise if the Legacy didn’t impress in this category. There’s plenty of space inside for five adults, while the large glass area creates a bright and airy atmosphere. A multitude of cubbies, deep door bins and a large glovebox mean there’s a decent amount of storage, while opening the large tailgate reveals a usefully low loading lip and a generous 526-litre boot. Fold the rear bench flat – which you can do with a touch of a button - and the carrying capacity increases to a van-like 1,677 litres. And of course, the combination of grippy four-wheel drive and self-levelling rear suspension makes the Outback a first-rate towing vehicle.

The Outback hasn’t been given the Euro NCAP treatment, but its mechanically and structurally identical Legacy brother secured a five-star rating. All versions come fitted with electronic stability control, six airbags, seat belt reminders and ISOFIX mountings for baby seats. The Outback also scores with its permanent four-wheel-drive system, which delivers reassuring traction in all weathers whether you’re on or off road. Owners can expect dependable service from the tough mechanicals fitted to the Subaru, while the solidly constructed interior feels like it will withstand all manner of abuse. And while maintenance costs aren’t the cheapest, Subaru dealers always score strongly in our Driver Power reliability survey, so you can expect a top-notch service. Subaru finished 11th out of 30 as a brand, having dropped out of the top 10 for the first time in the survey’s 11-year history. Owners praised Subaru for its dealer network again in the 2012 survey, but two of the firm’s biggest problems are its heavy four-wheel-drive transmissions and thirsty boxer engines, which drive up running costs considerably.